Boatbuilding: "A Piece of Furniture"

"A piece of furniture" we would often say as we eyeballed those McCutcheon or Souter built Classic International 14 dinghies, cold-molded in mahogany, glowing with multi-coats of varnish, all joints carefully crafted, beautiful wood everywhere. I was reminded of superior dinghy craftsmanship when I came across this stunning photo of  the interior of the most recent addition to the historical Australian 18 foot skiff fleet, the reproduction Myra Too. 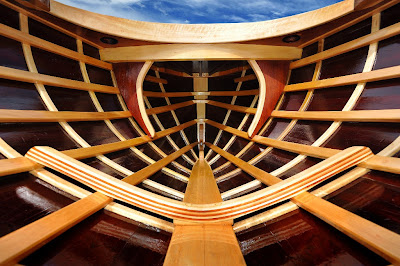 Myra Too was built in 2013 by Bob McLeod to reconstructed lines (by Australian National Maritime Museum curator, David Payne) of the 1951 championship winner. Myra Too was originally built and raced by Aussie legend, Billy Barnett. To build the reproduction hull, Bob McLeod used silver ash and, in the inner and outer layers of the hull, Queensland red cedar (the outer layers used rare, full-length pieces estimated to be between 400 to 600 years old).

Here is the original post on Myra Too's construction from the Australian National Maritime Museum blog.

From YouTube comes what, at first view, looks to be a typical mast-head GoPro video -- this of the historical 18 footer Yendys going around the course, However, with the historical 18 footers nothing is typical. Of interest to me was the spinnaker set starting at about 1:50 into the video. It takes four crew members to get the mammoth spinnaker pole out onto the mast, three of them heave-ho pushing and a fourth slotting the multi-piece pole together as it goes out. Once out, this long, long spinnaker pole then wags all over the place as they go downwind. These pre WWII 18's were heavy dinghies with lots of crew and this video shows that they pushed a lot of water around as they bashed around the race-course.

The history of Yendys from the Australian National Maritime Museum blog.


"A rival of Britannia, Yendys was built in 1925 by Charlie Hayes for Norm Blackman. This big hull is also built in the traditional heavy scantlings, but it illustrates an early piece of innovation, its transom bow. Hayes had another legend working for him at the time, Charlie Peel, who had been successful with transom bows on 14-foot skiffs in Victoria. As well, the 1920s was the time when the Restricted 21s showed how fast a lighter-keel boat could go, and Hayes and Peel were in the thick of this class too. Out comes Yendys, with its sawn-off profile and veed bow shapes, a sort of restricted-class yacht crossed with a skiff and with the bow overhang squared off. Despite the odd mix it went pretty well too, but although another two snub-nosers were built in that time, the idea did not catch on. It did show there was room to move in the rules, though, and the Queenslanders took on both innovation and the establishment at the same time."

Cheers, Ron, that was brilliant, love all the creaking noises...! Did you then watch the following video 47 mins long, from 1983, of 18's on Sydney harbor, with the 'old ladies' on the ferry, Ian Murray, really fascinating glimpse of the passion, together with some great old footage. Definately a keeper, that one.
Mike

Thanks Mike for the point-out. Great video just at the point when the 18's were getting into the stratosphere for campaign expenses. A juxtaposition of the old and new. 47 minutes long but worth carving out a block of time to view.