Seen at the 2016 Annapolis Sailboat Show: The Singlehanders Waszp and VX Evo

The VX-Evo is designer Brian Bennet's addition to the long list of assymetric spinnaker singlehanders (the MX-Ray, the Devoti D-One, the RS 100, the Weta trimaran - have I left anyone out?). It is a big singlehander, 4.77 meters long, 1.7 meters beam with a big rig, approx 10 sq. meter main and a spinnaker about the same size. The VX-Evo seems designed for big Americans but the salesman also metioned that there were some couples interested in buying the boat and sailing two-up.

The VX-Evo is built by Ovington in England. As of the boat show there were definite plans to ship three containers to the U.S. for a total of 24 boats to jump-start the class.

I just got a chance to look down into the VX-Evo cockpit but you can see the wedge hull with max beam and chine continuing well aft for power. Price complete is $14 K USD. 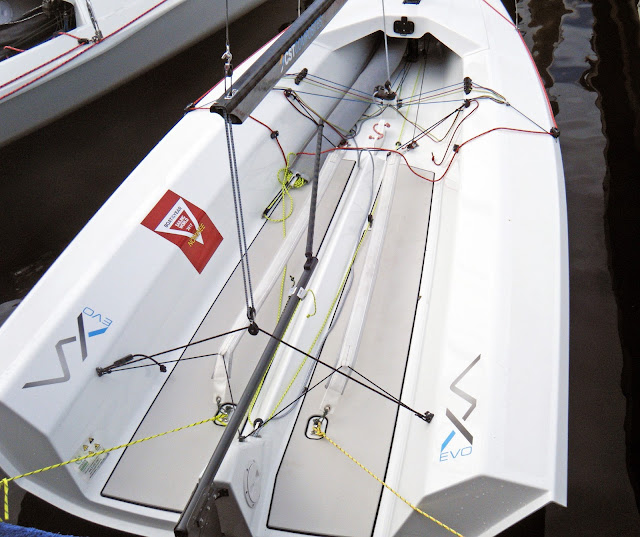 Video of the prototype being put through the paces. Interestingly there is no forestay (which allows the spinnaker to pop through on gybes) but there are sidestays.

The Waszp is the dialed back International Moth foiler designed by Australian Andrew McDougall. With a simple unstayed rig, foils that are sturdier aluminium, a heavier, less hi-tech construction, the Waszp comes in with a price around $10K USD. This is less than 1/2 of the price of the current International Moth - hence the description "Peoples Foiler". (I like the term "Volks Foiler" but I guess there would be legal issues with a certain German car company.)

The Waszp was sitting inside the Ronstan tent, surrounded by a crowd. I was able to poke my camera through to take a quick photo from the transom. The designer was busy talking to a rep from the U.S sailing magazine, Sailing World, as the Waszp is up for that mag's Boat of the Year Award - hence I didn't get to ask any questions.

Most present-day development of foiling seems to be on the catamaran platform. It will be interesting to see if this low cost Moth can bump up the popularity of foiling in the small singlehanded sector. 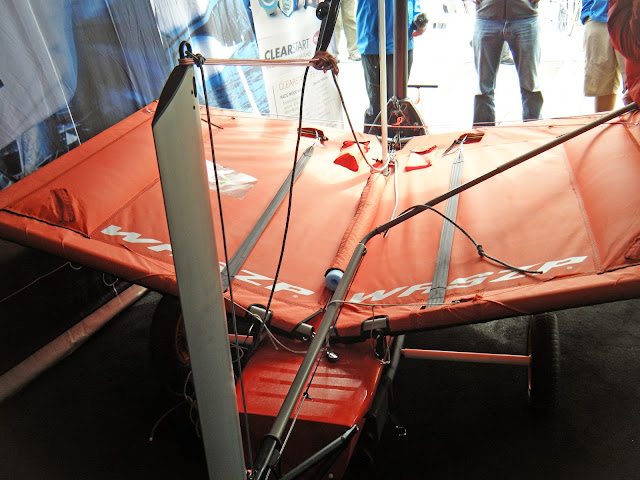 Certainly from watching the videos the foiling performance of the Waszp seems very much Moth-like. Note the wishbone boom. I gather the angle of the wings can be altered to make it feel safer for a beginner. There are also various sail sizes offered.

WASZP in Japan from Hiroki Goto on Vimeo.

Posted by Tweezerman at 6:06 AM

If I had unlimited funds and unlimited space to keep boats, I would probably buy both these boats. I have seen the VX EVO being sailed/tested locally and it certainly looks like a very impressive boat - if perhaps a little heavy compared to my RS Aero.

Boy, talk about never achieving muscle memory - three very different craft calling for three very different boat handling skills. Would be fun though. I might try to pigeon hole the three into various wind strengths where you think the fun would have the greatest payback (i.e maybe the foiler in 10-12 knots - where you could be flying without the possibility of hanging onto the daggerboard strut too much).