I was reminiscing in a email exchange with Kiwi Neil Kennedy about the string puller classes; those dinghy classes that seem to have a mind-bending assortment of rope controls to tweak everything. The old Olympic double-hander, the Flying Dutchman comes to mind as good example. These dinghy classes were more prevalent in the 1960's and 1970's and also can be found in the modern sailing world in other dinghy cultures, such as the English... not so much in the United States... except for the always interesting 505 class. I closed the email saying the 505's were coming to town for their East Coast Championships in September and I would try to get some photos of "string".

I was able to wander around the SSA dinghy park before the event started and did get some photos. Many of these systems photographed below I saw on the old International 14's of the 1970's and 1980's. However, on the modern 505 they have been refined to the Nth degree, using modern materials so they work flawlessly.

This 505 had a condensed user manual electrical-taped on the aft starboard seat tank. I asked the crew about it and he said it was from the previous owner - they didn't abide by the instructions but kept it around anyway. 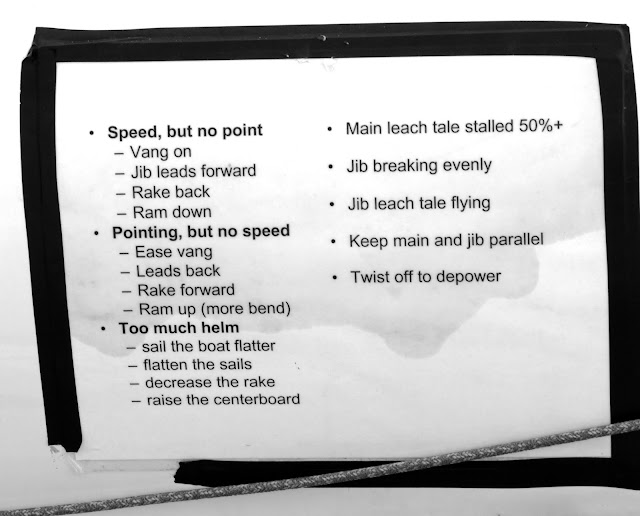 This 505 dispensed with the jib tracks on the inside of the tank and replaced it with a floating jib lead adjustment using thin spectra line (possibly to bring the lead further inboard - I didn't ask). 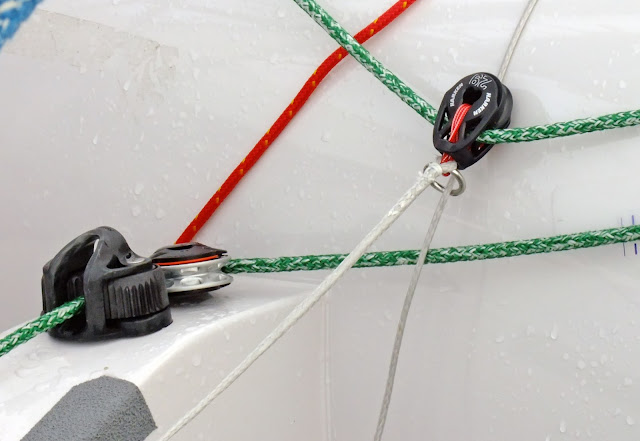 The ultimate. Supposedly a German dinghy fitter takes a bare Rondar 505 shell and this is what you get back. Note the hoop center main on a traveler. This allows weather sheeting of the main when you really want to twist off the top leach without having the rest of the leech sag off too far. One other advantage of such complexity in the middle of the boat; you can concentrate more weight in the center and get around the corrector rules. 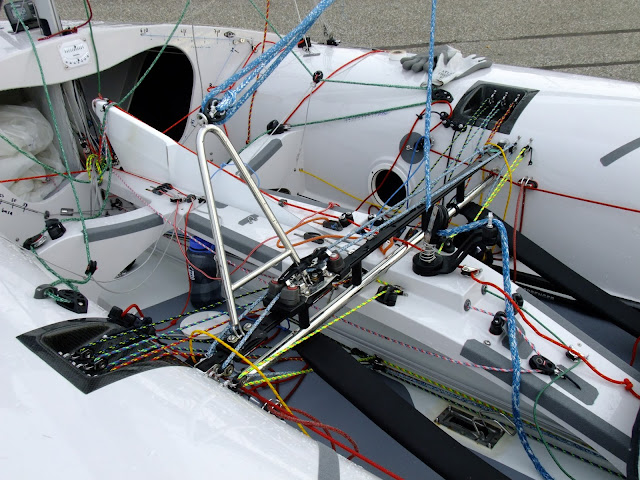 An older 505. You can tell it has been much modified by the multiple filled screw holes on the centerboard cap. This is an over-under mainsheet/vang control/cleat (mainsheet on the top, vang on the bottom). 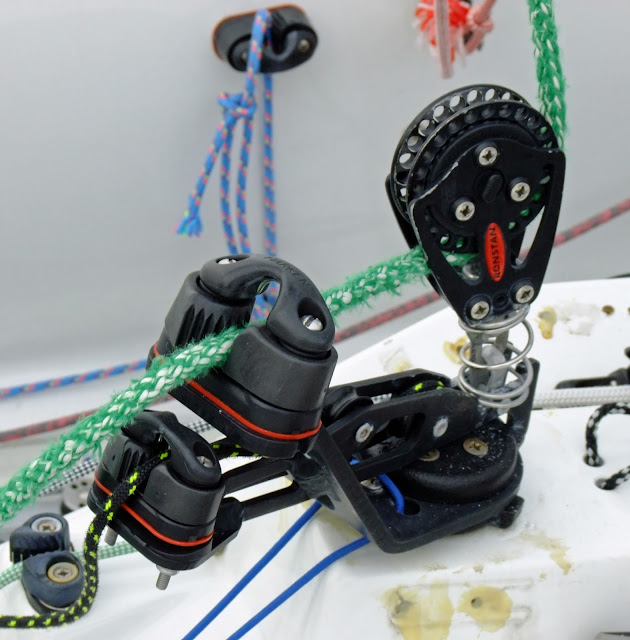 The German fitted 505 didn't use a mast ram at the gooseneck. Pre-bend of the mast was controlled by moving the shrouds fore and aft on a shroud track. The 505 mast rake can be adjusted throughout the race. With this set-up, the multi-purchase system used to tension the shrouds is out in the open and not buried inside the mast ring frame. Usually shroud tension on these dinghies requires something like a 36-1 purchase system. 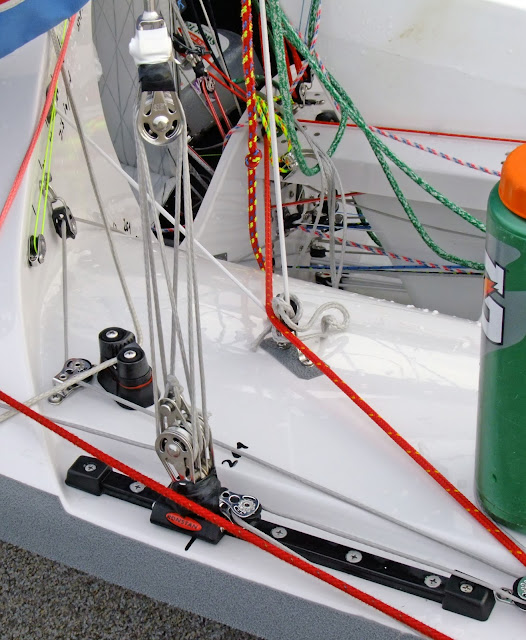 The control console on the German 505. I didn't ask about specific functions of each string shown. 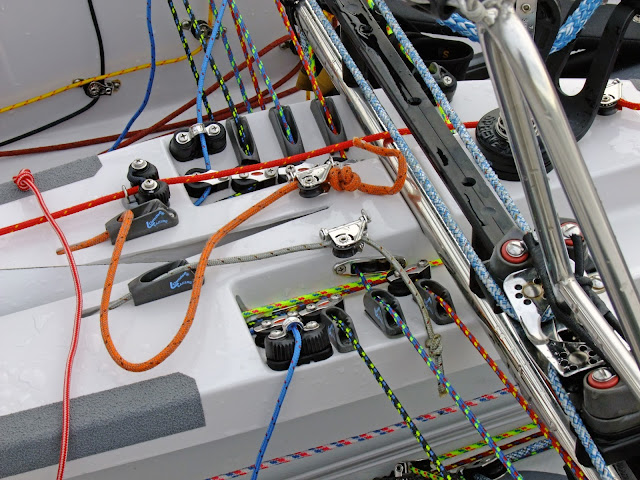 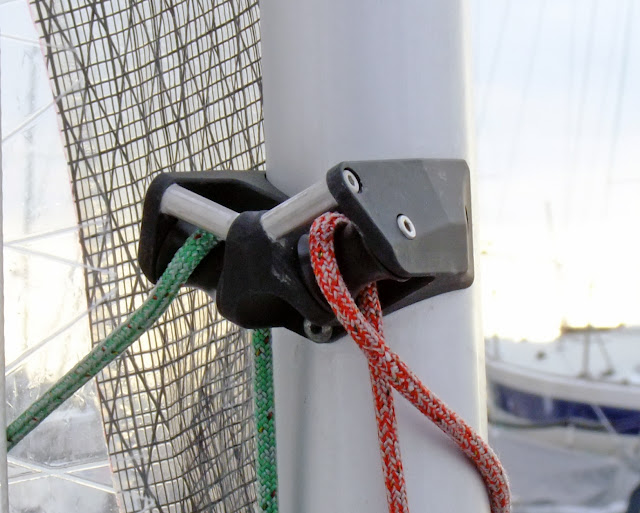 Twin carbon spinnaker poles on a 505 where the boom is not yet placed on the gooseneck. When the pole is launched the spinnaker guy is automatically sucked up into the pole. 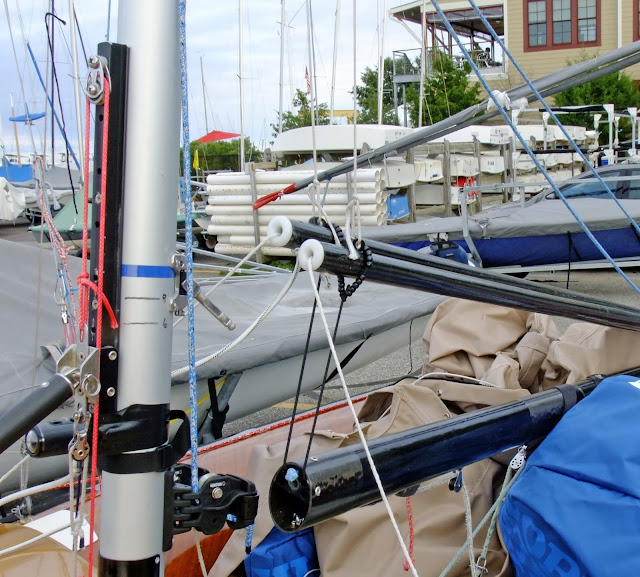 There are still very competitive wood-decked Lindsay 505's from the 1980's, albeit fully upgraded with the modern kit. The class now allows carbon booms but still requires an aluminum mast. 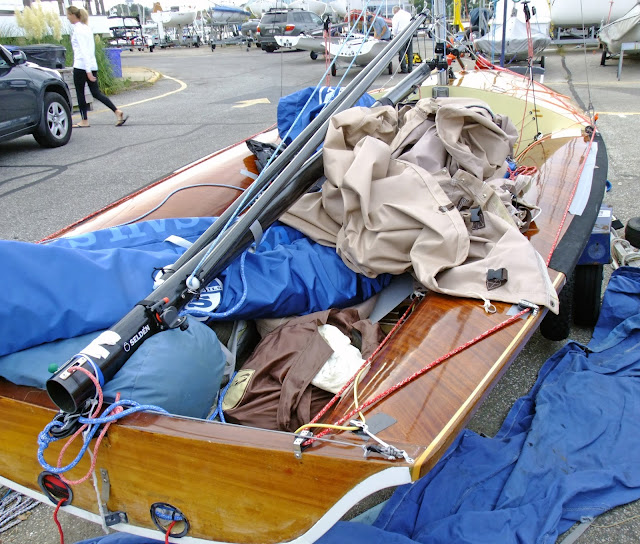 Some other posts featuring the 505 from the Earwigoagin memory bank.

Posted by Tweezerman at 4:48 AM

Email ThisBlogThis!Share to TwitterShare to FacebookShare to Pinterest
Labels: Other sailing dinghies, SSA