Getting Re-acquainted with an Old Friend

Subtitle: It takes a Village or how some old I-14 buddies got me sewing again.

I've spent six years out of my various careers working professionally as a sailmaker; several more years making dinghy sails part-time under my own label. I have owned an industrial sewing machine for many years, currently it is a Consew (having started with a Singer 107) which resides in the basement. About six years ago the original electric motor for the Consew stopped working and Paul Weiss, an old I-14 buddy sourced a replacement from E-bay and helped me install it. Unfortunately the original V-drive belt was now too large and the sewing machine sat gathering dust and aggravating my wife for several more years until Bob Ames, another I-14 buddy, decided to help me size the correct belt. So a week and half ago, with new electric motor and new V-drive belt, after an absence of many years, I sat down and got re-acquainted with an old friend . Compared to some of the incredible seamstresses I have worked with, I consider my sewing skills somewhat mediocre but passable. Bob Ames had an ulterior motive in finding the right belt; he had a cover that needed restitching... and that is what I did.

The blogmeister, his sewing machine, and Bob's cover. 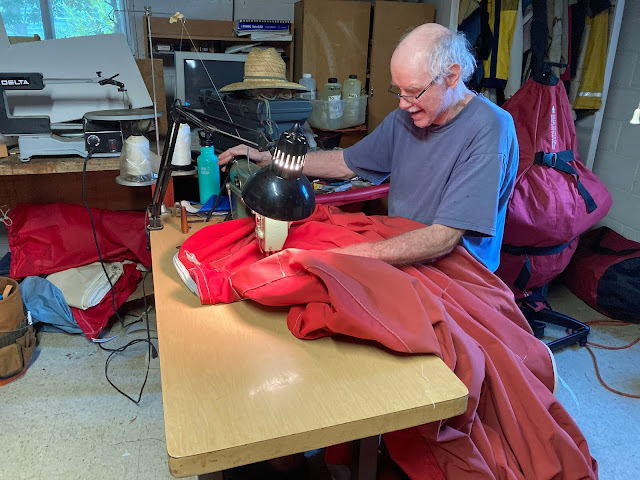 Sitting behind the Consew got me thinking about all the sailmaking concerns that have gone out business since the 1970's and 1980's and wondering if there is anyone out there collecting sail logos of all the companies now gone. Picking through the cobwebs of my memory of just the Annapolis sailmakers no longer around would include, Hurricane Sails, Horizon Sails, Haarstick Sails, Sobstad Sails, Shore Sails, Scott Allan Sails... and I'm sure I'm forgetting several more.

My part-time sailmaking concern was named Severn Sails and I mostly made International Canoe sails, having some success with them in the early 1980's. I'm sure all of those sails are long gone but I still own some sails that sport this very rare logo. 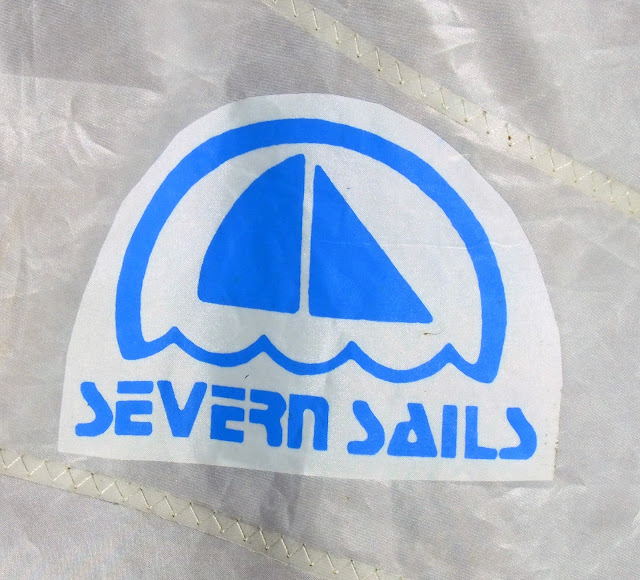 The Severn Sails logo featured a stylized Route 50 bridge as it crosses the Severn River, framing a main/jib. The exit to Annapolis is just on the south end of the Route 50 bridge.

Posted by Tweezerman at 8:36 AM

I wish I had an industrial sewing machine and the skills to go with it. I have gone off expensive canvas boat covers when my yacht is parked up and have been covering it with an inexpensive painters 'drop cloth'. Its 100% natural cotton, is light to handle and lets the boat 'breathe' as she sits in the carport. It's a throw over cover at the moment but I would like to cut and fit it to the boat for a neater fit and look - maybe I can sweet talk my wife into doing the sewing for me : >)

Wooden boats do need a cover that breathes. I have a project Moth sitting in my carport with a cover originally cut for another boat. Ill-fitting is not the word for it. It is amazing the amount of grit and grime that coats a boat just sitting in the car port. So at some point I need to do the same; make the cover fit better.