Bob Halsey, open canoe racer/sailor passed away about three weeks ago at the age of 93. Bob is one of two iron men Canoe sailors I came to know when I showed up in the International Canoe class in the early 1980's. Bob and Steve Lysak were already well into their 60's but had the strength and endurance of someone in their 40's. Bob would race the Open Canoe sailing events at Sugar Island, turn around at the end of the regatta, load the canoe with camping gear and go on a sailabout of the Canadian Park islands for a couple of days.

Bob was still swimming the Round Sugar race (over 2 miles in length) well into his 80's and when he went South to Florida, he would do the Rudder Club's Mug Race on the St. Johns River (the Worlds longest river race). A well sailed Laser usually takes 12 hours to complete the race, most time Bob and his open Canoe were on the water for 14 hours, finishing well after dark. Bob started his last Mug Race two years ago (he didn't finish that one, though he had previously won the slow handicap division with his open Canoe).

Bob had been a metal worker out of North East Ohio and he had that low key Midwestern, take it in, measure it, and then parse out a cryptic but insightful... this is how it needs to be done.... from someone who had been creating, and fixing stuff for his entire life.

He will be missed!

Bob, in his own words on his sailabout of the Thousand Islands.

Probably the greatest photo of Open Sailing Canoe Racing, Bob Halsey in his self designed and built sailing Canoe with the ACA rig, at Sugar Island. Photo by Chuck Sutherland. 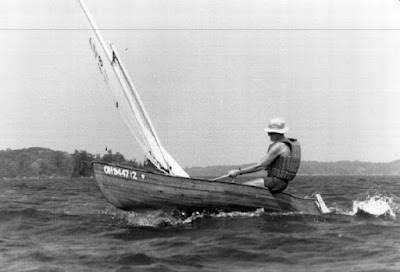 Posted by Tweezerman at 5:25 PM