Bob Patterson and the Chestertown Yacht and CC had the Classic Moths back this past weekend. We got seven Mothboats (I like to call our class the Circle M class because I'm tired of explaining.... no...no we don't foil like the International Moth... we're not that kind of Moth class... glassy stare... not comprehending... why wouldn't everybody want to foil? Sigh!!!!). Wind was a lightish westerly with a strong weather shore component but enough right shifts to keep it interesting. Mike Parsons won again and the Nationals are up next. With Jeff Linton not competing (Lightning Worlds conflict), Mike is riding a strong season...maybe this year? Mike almost beat Jeff two years ago but got passed on the last run of the last race.

While derigging on the grass, a Dan on a bike stopped by (my varnished Classic Moth... ahem... Circle Mboat seems to attract passerbys). Dan is just starting a stint on the Tall Ship Sultana , based out of Chestertown. Dan is from that subset of sailors (seemingly 180 from dinghy sailors), true seamen who handle tall ships with square sails and hemp line the size of your biceps. Surprisingly he was genuinely interested in my 11 foot dinghy and then admitted his father had built a 16 foot, strip planked replica of a Brigantine. We talked of his aspirations of moving up through the Tall Ship ranks (Sultana being one of the dinky ones) and the possibility of meeting up again on Sultana's next trip to Annapolis and then off Dan rode.

A 16' replica of a Brigantine seemed worthy of Internet investigation... Let's go to YouTube. Sure enough, there is a YouTube of what I assume is Dan's fathers Brigantine Replica.

Looks like there could be some stability issues. Somewhat roly-poly.

I usually have some pictures of Classic Moths sailing the regatta but no cameras at this event. From my archives, 2005 Chestertown rigging. 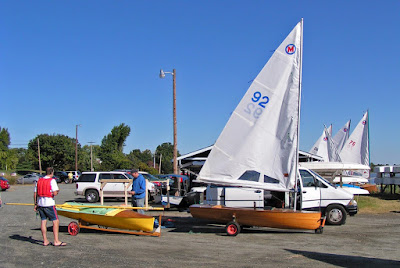