Your "boots on the ground" Earwigoagin reporter looked for all the small sailing boats at the 2013 Annapolis Sailboat show. There weren't many. There weren't many under 20', and there weren't many sailboats, even keelboats, under 28'. For probably the first time since the show opened in the 1970's, the Laser wasn't there. The Laser company, Laser Performance, and their boats were nowhere to be seen. There was only one national sailing dinghy class on exhibit, the 19' Flying Scot, tucked away in a forlorn corner.

We were left with three companies specializing in small sailboats at the Annapolis show, with two of the three having large numbers of rotomolded (plastic) products (I will leave Hobie, a company whose designs I much respect, with their rotomolded sailing kayaks and tris in a different category). Rotomolding has come a long way, the newest generation rotomolded sailboats using foam core to add rigidity to what was once a floppy boatbuilding material.

Rhode Island's Zim Sailing, known for their fiberglass Byte line, was also showing their imported rotomolded Club Optimist. According to Zim Sailing's Paul Zimmerman, the Club Optimist at the show had been in a club program for three years and I was impressed at how remarkably unscathed the plastic hull looked. This is certainly a good option for a club training purchase, but not one for a junior plugged into racing for the Zim Opti wasn't class legal.

The two English companies at the show, Topper and RS Sailing, had a large plastic product line of small sailboats. Topper had their Taz and Topaz, very similar looking except for length; flat hulls with the turn of the bilge very low. The Taz was the 3 meter LOA model for junior training. The Topper salesman said the front of the cockpit was designed to fit the ass of Topper designer Robb White, the idea being an adult could sit up front, back against the mast, whilst directing the young lass or laddie at the helm.

The front end of the Taz cockpit, big enough for an ass of an adult. 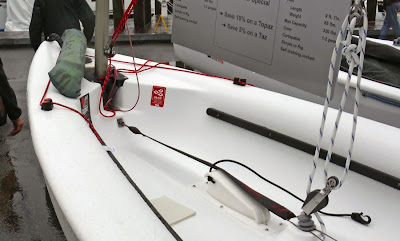 One detail on the Topper line that was well thought out was the righting line that was attached below the gunwhale to make it easier to pull the boat up from a capsize. It was shock-corded with a braided cover so it retracts against the hull.

RS Sailing had their recently introduced rotomolded 16-foot catamaran. Much more performance oriented than the Hobie line of plastic cats, this cat has the potential to be the first plastic racing sailboat class in the U.S. (as far as I know, none of the rotomolded sailing craft have yet to form a viable racing class over here - though, and someone correct me, the Hobie Wave may be the exception). Rotomolding allows design details that even glass construction cannot achieve and this RS cat has several of them.

The hulls have a spray deflecting lip up forward and then a long indented hollow aft, designed as a hand hold when carrying the cat up the beach. This indent runs from forward of the cross beam almost to the stern. 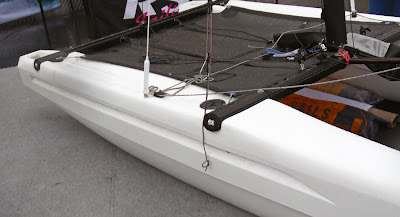 The deck where the crew sits is concave rather than convex. The RS Sailing salesman and I were debating the merits of locking in the crew (something the Hobie Wave catamaran does as well with convex decks and foam pads). The typical convex deck (rounded) allows the crew to slide in and out easier, probably more important for a serious racer. Also of interest was open self-draining wells in both hulls just behind the aft cross beam to the transom. Other than filling them with ice and beer, their purpose eluded both the RS salesman and I. Still, the design details that went into getting a semi-racing cat configuration to work with plastic hulls is impressive.

I was quoted 10k for the 16-foot cat but this is probably without the spinnaker gear which I'm guessing might add another 3-4k, still an excellent price. The RS salesman said RS is trying to expand in North America because the European market is flat at the moment. This 16-foot cat looks like it may have the legs to do just that. 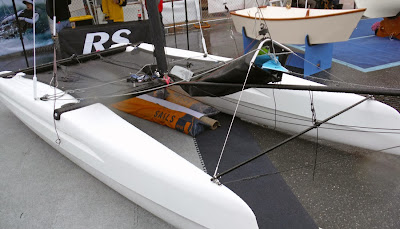 Well,
In addition, there was the 'prototype' mxNext and an interesting blowup sailboat (Tiwal) from France (with the young lady designer).

I saw a video of that inflatable boat. Quite interesting.

Did they have an RS100 on display?

WaveDancer: I saw the inflatable sailboat but made the snap decision that it didn't look as if it would sail that well so I kept on trucking. I am not infallible so please let me know what highlights I'm missing on this craft. I completely overlooked the mxNext (where was it?).

Tillerman: The RS100 was there. I like the way RS did the gnav vang on this boat and was photographing it for ideas on a project I have at home. I already covered the RS100 in this previous post. I didn't ask the salesman of the extent of North American RS100 fleet activity - but I haven't heard on any major regattas in this boat.

Yeah. It's a classic chicken and egg situation. Nobody is buying them because there are no fleets and no regattas.

My theory (which you may have heard before) is that boats like the RS100 have a hard time taking off in the USA because most dinghy racing here is one design fleets. Hardly any clubs do dinghy handicap racing. Whereas almost every club in the UK has a PY handicap fleet so you take your RS100 to the local club and sail PY for a year or two until you have persuaded enough other sailors there to buy one and then you start some RS100 one-design racing and host a RS100 regatta. And the same thing is happening at every other club so pretty soon there is a RS100 nationals with 150 boats.