I managed to squeeze off some photos in between running the races for the 2013 Nationals. Winds on Saturday started off with great promise, around 10 from the Southeast, blowing up the river, a sea breeze direction I've wished for when I've been racing but never saw and, now that I was the race officer, I was watching with envy my fellow MothBoaters enjoy the conditions. This breeze brings a little lump to the race course. In the second race the wind lightened up, shifted to the South-Southwest and died but, with some consternation and cussing, the racers were able to crawl up to the finish. For the next three races the wind shifted back to the SE and blew up the river, though at a lighter velocity of about 6-8. On Sunday we had the more typical shifty Northerly blowing across the river, 6-10 with an occasional higher gust, and finished with 4 more races to make 9 total for the weekend.

Joe Bousquet is the new overall champ. Joe re-introduced the Mistral to the Classic Moths back in the late 1990's and has just recently given Try-Umph a deck rebuild. He was untouchable on Saturday: all firsts (though Mike Parsons was leading him in one race to just at the finish). Joe trucking upwind. 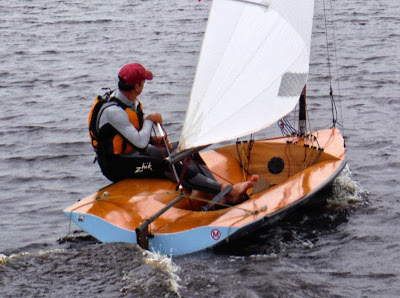 John Zseleczky in his mod-Mistral Y3K Bug was second (the E-City waterfront with watertower is visible in this photo). 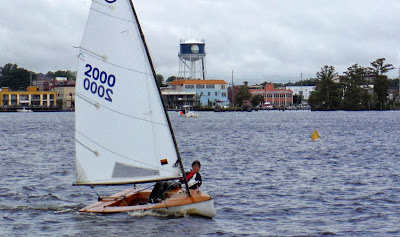 Mike Parsons in another Mistral was third. 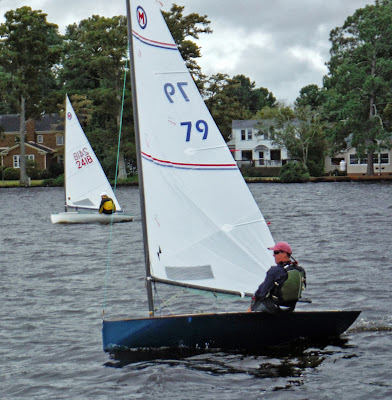 Walt Collins won the slightly slower Gen 1 division in his Europe Dinghy (though he was giving the Mistrals fits on Saturday). Here he is is to windward of another Europe Dinghy owned by John Pugh. (John and Sarah Pugh host the fleet out of their backyard on the river - a nice grass lawn - we are indeed spoiled!) 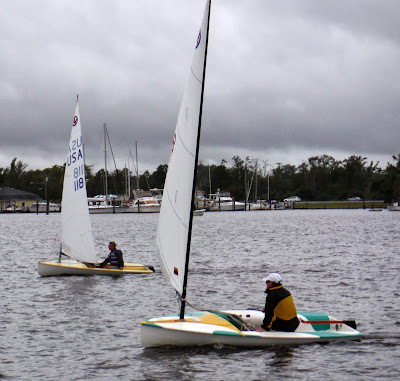 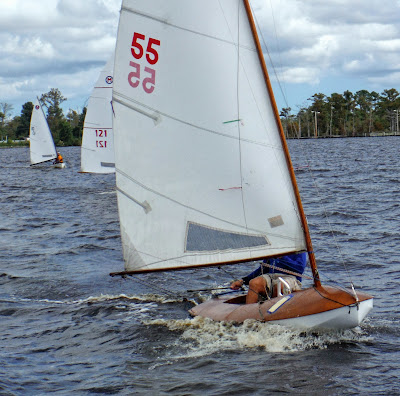 Carol Terryberry borrowed a Mint design and acquitted herself well to win the Women's Trophy and Zach Balluzzo took the Junior Trophy. Fifteen Mothboats competed, down from last year, with some significant no-shows including multi National Champ, Jeff Linton. Next year will be very interesting as the class voted at the AGM to make the Vintage winner the National Champion of 2014. This is to celebrate the 25th anniversary regatta since the resurrection of the U.S. Classic Moth Class in 1989. The intention will be to highlight racing in some of the early Mothboat designs. There will be a push on for skippers to uncover unused Dorr-Willey's, Ventnor's Connecticut's, and other pre and post WWII one-off Mothboat designs for this regatta (complete with wood masts and booms).

A grateful TOH to Greg Duncan, Regatta Chair and the aforementioned John and Sarah Pugh for another delightful weekend in E-City.
Posted by Tweezerman at 12:57 PM