John Z., Bob Ames and I made a point to travel east to wander around the kayaks and small sailboats that abounded at Chesapeake Light Craft's OcoumeFest over on Kent Island this past May. This is a CLC promotional event; for the most part, the small craft here are owner-built CLC kit boats. I did run into two interesting sailors who I proceeded to engage in long conversations. Dudley Dix, yacht designer, was there with his Paper Jet dinghy. Fortunately for me there was no wind so he was grounded on the beach. We talked at length about the catastrophic rudder failure and capsize on the aborted Capetown to Rio race in his design Black Cat - Click here to read this previous Earwigoagin post. He told a fascinating and harrowing story which reaffirms my desire to remain in dinghies close to shore and eschew any ocean racing. I also ran into Ben Fuller, a friend from back in the 1980's who was there to do the short 65 mile version of the Chesapeake Challenge in his kayak, which was to start Sunday on the morrow. As with any conversation with Ben we covered a lot of ground, from sailing 210's in Hawaii, to Delaware Hikers with racks, to his latest project of digitizing historical commercial fisherman and waterman photos.

One of John Harris's designs that caught my eye was the two prototype 15' proas which he has named the Outrigger Junior. Designed for off-the-beach sailing, it looks like a reasonable kit-built alternative to the Hobie 16. Never having sailed a proa, I'm not sure what the experience is like but there has to be considerable difference from tack to tack; on one tack leveraging the weather ama with your weight and on the other tack, counting on the now-leeward ama to take all the sail loads. The sail plan is large and is of the crab-claw configuration (basically a lateen with a forward raked main-mast which keeps the boom well up in the air).

John Z. was particularly interested in the netting used between the main hull and ama on the Junior. 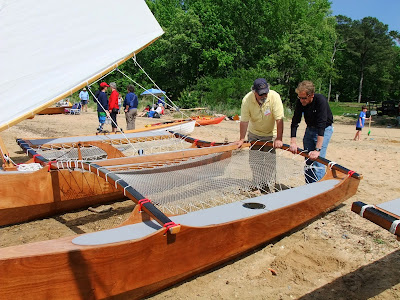 The wooden cross beams were reinforced with carbon fiber. 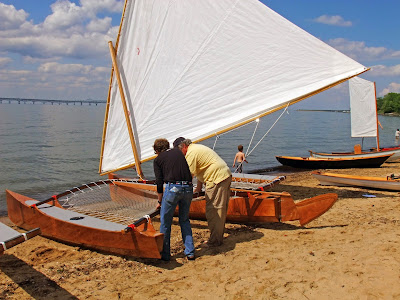 A beach photo of OcoumeFest. 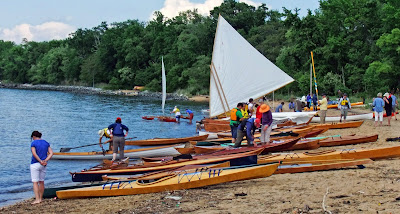