In the winter of 1897 - 1898, American C.G. Davis designed and built a 16-foot chined scow for his own use. It was a simple build for that time, the hull copying the shallow arc bottom of the Clapham designed Bouncer (a designer Davis highly respected). Davis claims he designed the Lark scow as a general daysailor but, in 1898, he raced his newly built scow in the fifteen-foot class in several Long Island regattas and won. Sensing a great deal of interest in his little scow, Davis, at the time the design editor of The Rudder, printed the plans over three issues in the fall of 1898. The response was enormous and readership in The Rudder exploded. When you tap into a successful market, you keep going and The Rudder started a How-To series of cloth bound boat plans offering several different boats with the plans for the Lark advertised as "How to Build the Racer".

In the early 1900's the Lark scow was built everywhere, worldwide. Fifteen Larks were built at the Yokohama Y.C. Builders built to plans and those who couldn't help themselves built smaller Larks, bigger Larks, Larks with counter sterns. By the 1920's Lark fleets in the U.S. seemed to be concentrated around the Great Lakes. By the 1930's the Lark was disappearing as Crosby, a later editor at The Rudder, in 1931/32 introduced his own small sailboat design, the home-build V-shaped centerboarder, the 15- foot Snipe. The Rudder republished the plans for Lark in 1940 but by then, on the eve of World War II, the Lark was now in competition with several popular chined centerboarders available in the United States; the aforementioned Snipe,  as well as the Comet, Moth, and Lightning classes.

As far as I can determine, there is one Lark fleet remaining in the world (there are two Lark variants still going - I'll cover those further down this post). Rondeau Bay in Ontario, Canada (just across Lake Erie from Toledo, Ohio), specifically Erieau Y.C., has a fleet of about a dozen. The Lark fleet on Rondeau Bay got going in the 1930's.


From a comment by Don Weir on the Rondeau Lark builders: "I am proud to say my grandfather Fred "Pop" Weir and my Uncle Al built the fleet of them in Rondeau. I first learned to sail in one of them."

The Lark fleet at Erineau YC bucked the gradual extinction of the Lark by achieving its greatest popularity after World War II. In 1972 between 30-50 Larks were racing on Rondeau Bay. In 1963 Bill Kerr produced plans to build the Lark in plywood and the current fleet in Erieau Y.C has a combination of some new builds as well as restorations. They still retain the traditional wooden spars and have made the rig a gunter rig compared to the original gaff rig.

Lark variants still going strong are the Larken Klasse of The Netherlands, specifically Friesland, and the Monotype de Chatou of France. The Larken Klasse is a smaller Lark, a 13-footer singlehander with keel, a design that came out at the beginning of the 1920's. The Larken Klasse is the most popular of any Lark type today, the class experiencing a resurgence with upwards of 20+ attending regattas. The Larken Klasse sports a full battened, gunter rig that Manfred Curry popularized in the 1930's.

The Monotype de Chatou was a French variant that combined the Lark with the Linton Hope Sorceress design and was built at the beginning of the early 1900's. It is hard to see a direct connection to the Lark when looking at photos of the Monotype de Chatou as it appears to be round-bilged like the Linton Hope Sorceress and not hard-chined as is the Lark. Those still sailing, as far as I can determine, are restorations.


This ad comes from a 1901 issue of The Rudder. The plans for the Lark were so successful that The Rudder began a very popular How-To series at the turn of the century. They would also add another scow, the Mower designed 24 foot Swallow scow, the plans first published in the magazine and then a cloth bound How-To book.

A Erieau Y.C Lark. Nice varnish job on the deck! The fleet retains the wood spars. (Doug Kerr and crew in Sandhopper) 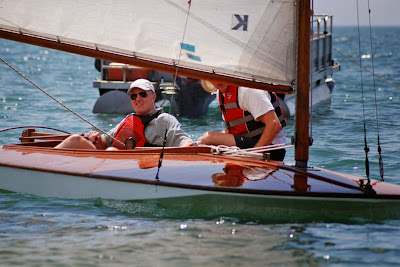 The Erieau Lark sports a gunter rig (the original plans called for a gaff). It still has a big mainsail for a 16 footer. (Stephanie Pirscher and Louise Marshall in Hangover) 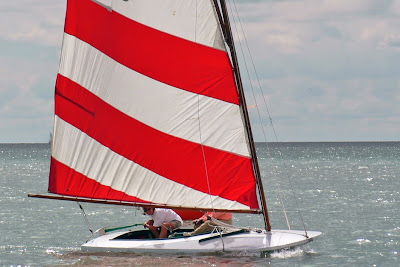 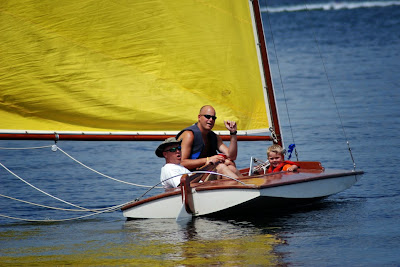 Compared to the original plans the Erieau Larks have elongated the cockpit (made the back deck shorter) and have changed the rudder design to improve handling. (John and Mackenzie Graham in Pinky II) 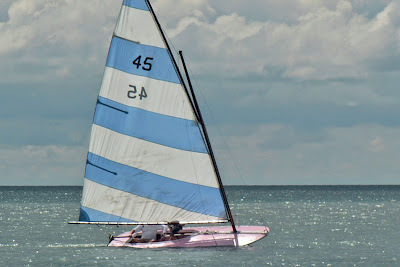 A photo of a the shorter Friesland;Larken Klasse stuffing her bow into a wave. 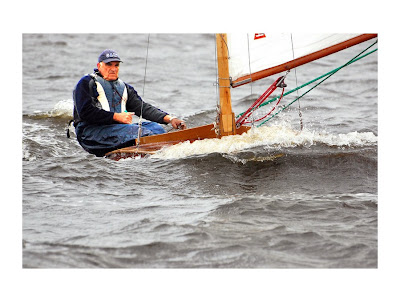 A photo of the French Monotype de Chatou. The dimensions are the same as the Lark scow but the design is round bilged and doesn't have a scow bow. Photo by Pascale Guittonneau. 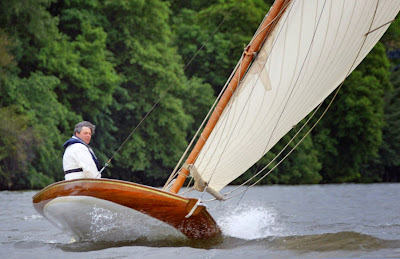 Click here for the Swallow scow, The Rudder magazines second DIY scow. Plans came out in 1899.

That's a beautiful boat. Looks like it could be tricky to sail under some conditions.

Yeah, the Erieau guys have an upper wind limit of around 15 mph. I could see that big mainsail driving this small scow under in a lot of breeze. The design seems very low freeboard. But I think it would be ideal on your lake in Japan.

I am proud to say my grandfather Fred "Pop" Weir and my Uncle Al built the fleet of them in Rondeau. I first learned to sail in one of them.

Nice to hear from you. If you have any old pictures of the Lark fleet I would enjoy publishing them. You can contact me by clicking on the "About Me" section on the right side of the page and then clicking on my email link.

Don, my family had a cottage in Rondeau park for about 10 years from about 76-86 and we owned a Lark that your grandfather had built - what an absolute legend he was! Raced in many an Erieau-Rondeau race, although you guys always had such light winds at your end of the bay ;-). The Lark was a heck of a boat to learn on - unforgiving of mistakes, but it sure made us good sailors!

As my brother just pointed out, the Lark was one heck of a boat to learn to sail on and they are virtually impossible to tip. We had to learn how to right it as part of our lessons and it took putting four people on the leeward side of the boat to get it to tip, just so we could right it again! Tweezerman, I am sending you a few pictures.

My father and grandfather built one and we sailed it on Coldwater Lake in southern Michigan for many years. It had a more rounded nose than some shown. It would beat any other boat on the lake except a Lightning. It was actually quite easy to sail, but as someone mentioned, if we got a little too much weight forward it would nose dive. We added the V shaped baffle in the photo and that helped keep the water out of the cockpit. It was a great party boat. We could easily carry a dozen teenagers out on the water having fun.