Some Idem Photos from Andre Cloutier

Andre Cloutier over at the Ravenwood blog took some fetching photos of the Idem class sloop Elfmere when he was attending the Wooden Heritage Canoe Association Assembly on Lower St. Regis Lake. His original post of the WHCA gathering can be found here.

I have posted before on Earwigoagin about the Crane designed Idem class sloops where I provided more details about one of America's oldest racing classes. 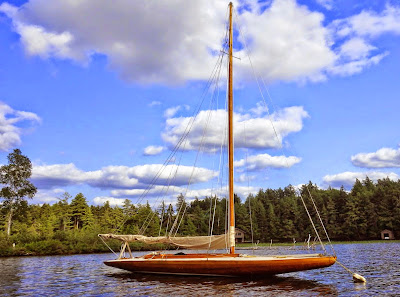 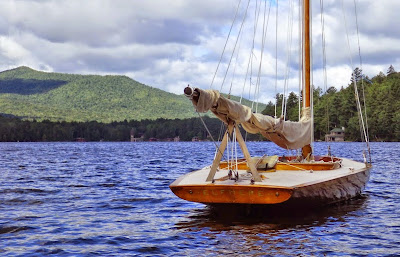 In the early 1900's, St. Regis Lake was the summer destination for many of New York City's upper-upper crust as the New York Times reported in this 1902 piece.


"The month, of August in the Adirondacks opens with all the camps occupied, with possibly a few exceptions, and in those instances preparations are hastened to have everything in readiness for the coming in the near future of those who are to occupy them. Of camp life in the Adirondacks this season it may be said that it is the most fashionable of years, for the Vanderbilts, the Rockefellers, the Reids, the Morgans, the Blaines, the McCormicks, the Stokeses, the Mortons, and many others are in their camps, some of which are new and others of which were enlarged and extended In anticipation of entertaining many friends during August and September. This, together with the number and class of the applicants who have reserved apartments at Paul Smith's for August and September indicates that the St. Regis Chain of Lakes will he the rendezvous of many persons distinguished in the financial and business worlds; as well as the social world.


More of the interesting history of the St. Regis Yacht Club can be found over at their Wiki page.

And here is a particularly well-done drone video of the Wooden Canoe Heritage Association showing the stunning beauty of the lake region.


Wooden Canoe Heritage Association 2014 Assembly from Above the World Films on Vimeo.

Posted by Tweezerman at 9:58 AM