I periodically check the Google Stats on this blog for search keywords that Net denizens are using to get directed to Earwigoagin. Two days ago these odd search keywords popped up, "Steve Toschi International 14 sailboat."

Steve Toschi was United States' top International 14 skipper in the mid-1970's. With Dave Klipfel in charge of the front half of the 14, this team won several National championships and also the prestigious POW cup in England in 1975 (The second American team to do so; Stuart Walker and Stovey Brown being the first in 1964).  Steve and Dave were a Mutt and Jeff team, but backwards for a trapeze dinghy; Steve the skipper, long and lanky, Dave the trapeze crew, short and quick. (This was not too unusual for the American International 14 fleet at the time, there being a good number of women crews; even I got my start crewing International 14's as a scrawny teenager.)

Steve had his own sail loft in San Francisco at that time, Leading Edge Sails, and the team was always blazing fast in any breeze (as all of the San Francisco 14'ers were, living and sailing and surviving in the big breeze of San Francisco Bay). I ended up having my best two competitive years in the International 14's when I had the good fortune to race on Steve Toschi's ex-POW winner, Stradivarius, once it got sold into the east coast.

I figured, given the chance that, down the road, some other person would sit down and type the Google search words "Steve Toschi International 14 sailboat" I should dig into my archives and provide some content that would match the keywords. I found two photos.

I think this is the 1973 U.S. Nationals in San Francisco Bay. Steve and Dave are in US 946 which is a Sailnetics Kirby IV. 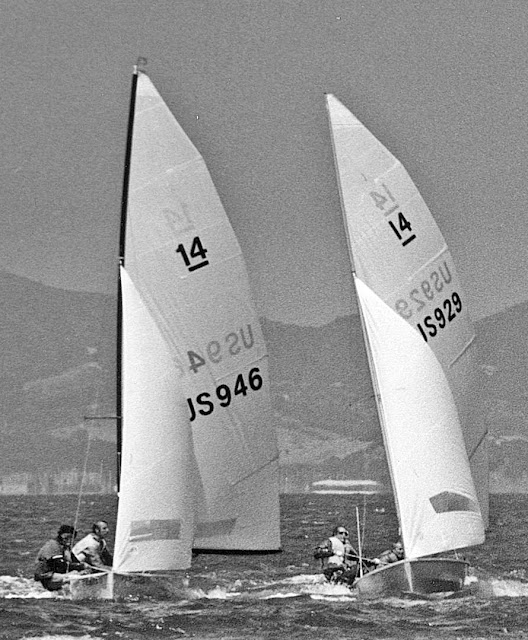 Steve raising the main at the dock. This looks like the same KIV. Later on Steve would design and build two 14's, his first design, Home Brew, a three planker plywood design that was ingeniously engineered to take the fiberglass interior of the Sailnetics KIV. Notice that T-shirts and jeans were considered perfectly acceptable as sailing kit in the 1970's - most of us favoring the cut-off jean shorts that Dave is sporting in this photo (and now, 40 years on, these jeans contributed to our generation keeping a legion of dermatologists busy today). 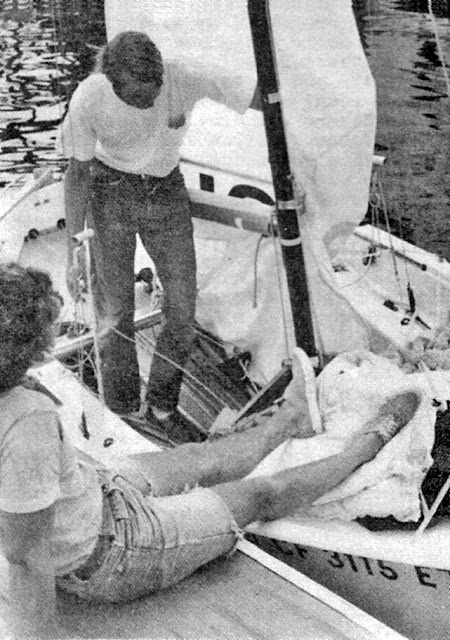 Posted by Tweezerman at 6:27 AM

Yes, t-shirts and cut-off jeans were standard sailing attire in the 70s and life jackets only when mandatory (at least for me)

I always wore a life jacket in the 1960s and found soaking wet sweaters and jeans were great ballast when it blew 40 B's.

I still wear cut-off pants of some description..........don't believe in spending hard-won cash on super-expensive yachting gear. But I have progressed to a $200 second-hand dry suit, that I will be testing this year; it's pretty chilly in the water around these parts, and a dunking is not to be taken lightly. Used to wear heavy wet wool sweaters in my OK dinghy days in Oz....
I imagine you have a room full of archives, Rod, but I just acquired a few spare copies of 'The Dinghy Year Book' 1962/3/4/5, edited by Richard Creagh-Osborne of Finn fame I would happily pass on to you if you like.

Yeah, I remember the wet sweatshirts era. They were dangerous as they did limit your ability to swim when capsized. You definitely needed a life jacket when you were wearing a couple to add weight. Back then manufacturers went a lot further than our anemic wet sweaters. They were offering stitched together fabric weight vests in various soaked weights, and also weight vests that had filled water bottles/bladders in pockets. All the weight was high up, around the chest. Thankfully the IYRU stepped in and completely banned this foolishness.