Seen at the 2016 Sailboat Show: the Tiwal - an Engineering Marvel 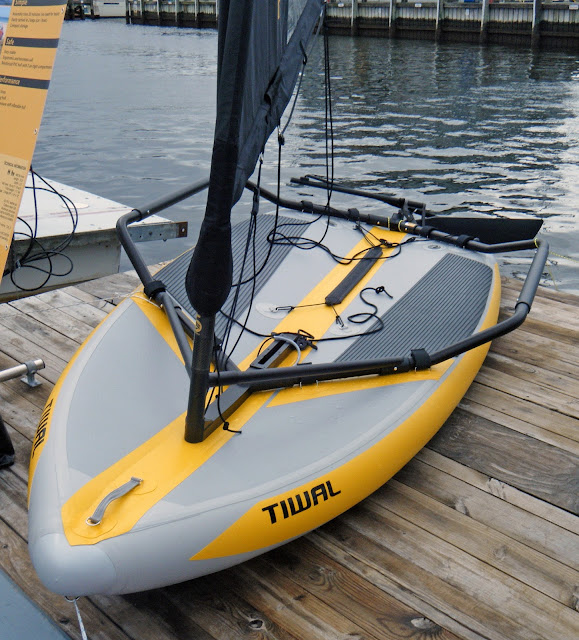 The Tiwal is the French inflatable sailing dinghy. Tiwal has been shown at the Annapolis Show for the last couple of years, but I've quickly walked past the booth, dismissing it (from my hard hull, traditional dinghy perspective) as most likely a very slow-performing, oddity. Thus, the Tiwal never made it into an Earwigoagin post. Why post about the Tiwal this year? During the show, Tiwal had one of their dinghies out bombing around on Annapolis Harbor and, I must admit, the Tiwal sailed well, tacking easily and showing a good turn of speed. It's time to confront my prejudices and admit that there may be something to this blow-up sailing dinghy.

The Tiwal is a 3.2 meter (10 1/2 foot) scow, or in modern parlance, a fat stand-up paddleboard. (To my eye, the Tiwal looks like a small, modern version of the 1900 French scow, the Monotype de Chatou; though I doubt the designers actually referenced this vintage design.) An exoskeleton of interconnecting tubes and wings, support all the sailing bits; mast, daggerboard, rudder, skipper - one reason I find the Tiwal an engineering marvel. I was pressed for time so I didn't spend any time talking to the salesman at the booth; I just had time for a quick photo.

The trend in the United States is for the young to prefer to live in apartments or townhouses (something the Europeans have always done). Without a large yard to store large objects, the easy-to-store Tiwal may gain some inroads among millennials, who are trying to figure out how to go boating without worrying about where to stash a boat on a trailer.

The following video is this years Tiwal Cup, which looks to be a fun-based regatta held in France.

George A. has a better camera and took a better shot of the Tiwal sailing in Annapolis Harbor, so I lifted the photo from his post on the 2016 Sailboat Show. 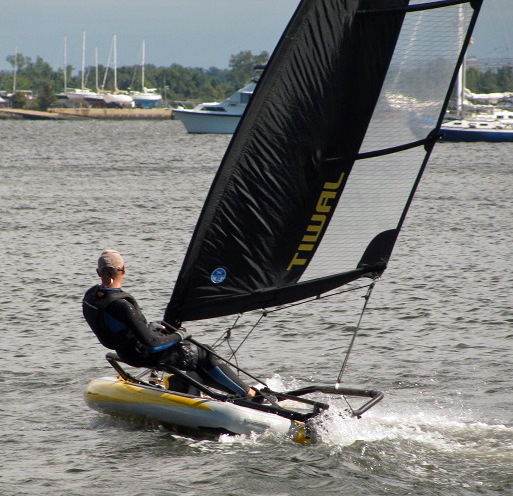 Posted by Tweezerman at 6:31 PM

If you live in an inner city apartment you could store your Tiwal next to your Klepper Kayak - designed early last century for inner city European living and for easy carrying on trains.

Thanks for this - I had never heard of the Tiwal - an interesting concept and seems high quality. But they are not cheap - more expensive than a Laser.

The inflatable SUP's are also more expensive than their hard hull counterparts. It seems you pay a premium for compact storage. I have neighbors across the street who are not boaters but one of their sons had a slightly deflated SUP strapped to the top of his car during the summer. I wouldn't be surprised if this turned out to be the way many people used an inflatable sailing dinghy. Inflate it at the beginning of the summer, keep it inflated during the summer, deflate it when fall comes around.

I had a Klepper kayak for a short period of time. The rubberized coating was quite heavy though my wife liked the stability of hull form. There is one outstanding thing about modern technology; it has been able to shave considerable weight from old concepts.

Durability would be a question mark but many cruisers use their soft-body RIB's year round.