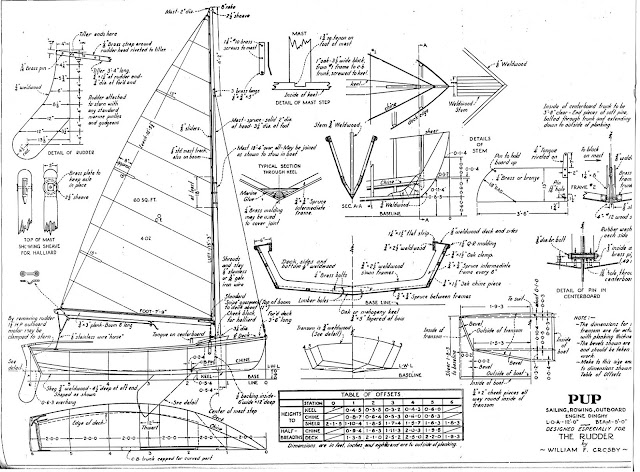 Posted by Tweezerman at 5:46 AM

..... I had another read of this post - It is amazing that 1/8th inch plywood was specified, this is not much stronger (certainly not more puncture proof) than a hull covered in painted canvas.

I love the old sailing magazines - they often used to publish plans like this complete with the table of offsets for any enterprising sailor to have a go at building..... and again, those Crosbys, they certainly knew how to design a pretty boat.

https://www.facebook.com/Pup-class-dinghy-801016733324618/
Group in Geelong Victoria Australia has been developing a modern derivative.
Noty sure I agree with all changes, but someone is doiung something with this pretty nice little design.
SHC

Thanks Steve! I pulled the link over to the main post.

Hi I am the person behind the fleet of pups that came back from the dead in 2000 . The pup class in Queenscilff Victoria au has never been built to original plans . The outside hull has been but internal has had many variations. Not long after William Crosby published the plans the local boat club at the time wanted a training boat .( queenscliff boat club now queenscliff Lonsdale yacht club ) But if the pup was built to plan a capsize in local waters would mean loosing the boat and possibly never getting ashore again so the hull was decked over with a small cockpit added for feet similar to a laser class dingy. This is not modifying the design as a bad thing as safety is important and in 1935 these things were not thought about. This means that the pup class then got a following and grew . Without this it would not have gone any further than a drawing of a vessel . Fast forward to 2000 I was a member of the club they again wanted a training boat to restart the dinghy section . I got a set of plans and built a hull then looked at how to make it practical , light and safe . Some would disagree that it is not per plan but many dinghy classes had to evolved to be useable . So that is what I came up with . Anyone that builds a vessel to 1935 design and is a purist does not consider all the facts also risks when sailing . Even the jack holt heron has gone through modifications to make safer . These early designers came up with fantastic designs but the down side was that the LWL was not correct due to construction methods. The total weight of the hull set it lower in water let alone with equipment and persons Also the safety of the occupants was not considered . In 1960s laws were introduced around the world that all small vessels must have enough buoyancy to float hull and crew to be able to bail or sail home .

You are absolutely correct that Classic designs can be improved upon and the Pup, as originally designed as an open dinghy, was definitely made safer with a cockpit. I always welcome more photos of the Australian version. You can find my email address in the Profile section. Rod