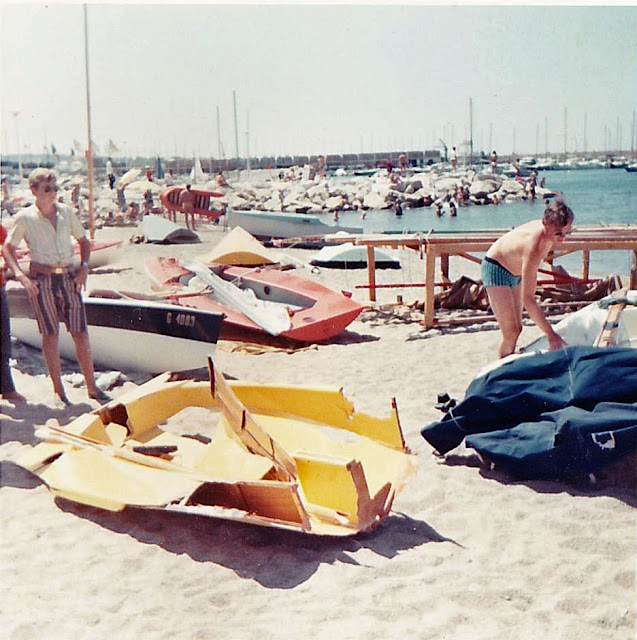 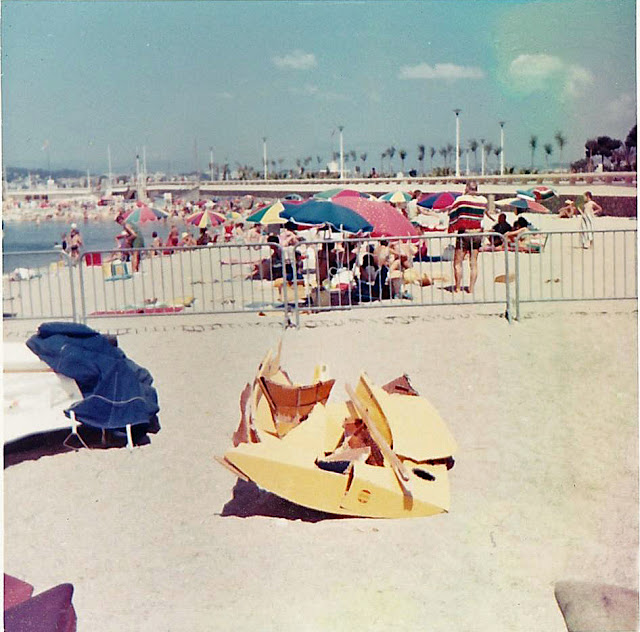 These grim set of photos (recently popped up on FB) were taken in the aftermath of Race 3 of the 1968 Moth Worlds in Cannes, France. From the lead-in paragraph of the race report:


"This was the day the hard weather enthusiasts had been waiting for. The wind was screaming through the rigging as the boats were being readied on the beach. The lighter helmsmen were soon in trouble as the boats sailed out of the harbour and hit the full face of the wind. One of the first out, Jean Paul Ladermann (Swiss), in a brand-new, bright yellow Duflos, got caught in irons tacking to avoid a motorboat, and, before he could bear off, was hurled against the vast concrete boulders of the breakwater by mountainous waves. He managed to escape injury by scrambling up the rocks, but within seconds his brand new boat (uninsured) was broken into a hundred pieces. Our heart went out to him, and it certainly did nothing for the morale of the rest of the fleet as they tore out of the harbour past this grim witness of the power of the elements. Marie-Claude was also overpowered at the harbour entrance, but righted again and battled out to the start. After lengthy delays, to allow the battered fleet to get to the start line, the wind steadily increased from 20 to 30 knots and it rapidly became a battle for survival. Eventually only 24 out of the 47 entrants reached the start line in a fit state to continue."

Eleven would finish this race. Photos of some of the survivors returning past the infamous breakwater.

American Bob Patterson (who was a teenager in 1968) has this recollection of the race:


"I remember it well. I sailed my Patterson Shelley 2720. No air tanks. Two Elvstrom bailers worked overtime to keep me floating but one kept closing as I would come to the top of a huge swell and the chop would hit the bottom hard. I had to kick it open. During one kick the handle came off and the chute was gone, leaving a rectangular hole [in the bailer]. I was reaching so I rode a wave all the way into a sandy beach. I scavenged an abandoned Moth hull for a replacement and got back in the race. Finished 10th."

The elder-Mothist, Bob Patterson, with his restored Shelley (built by his father, Carl) at the 2015 Brigantine regatta. 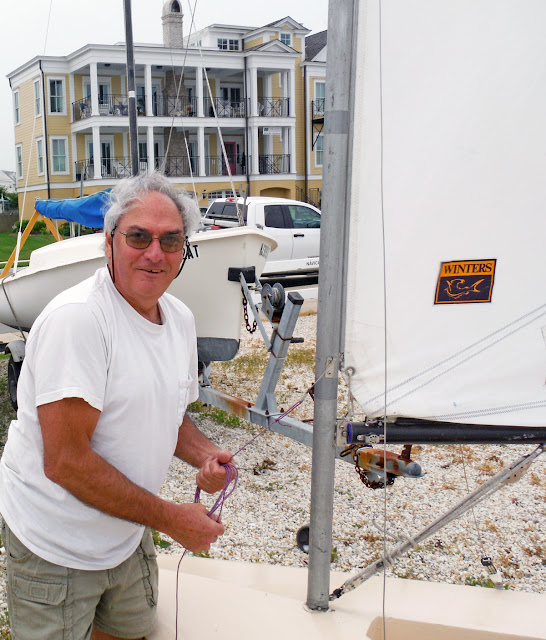