Finally got some sailboat racing in ........... Portsmouth Boat Club

You would have thought I've gone all traditional, waiting for Memorial Day weekend to get my first racing in for the year. This one was a road trip, as are nearly all regattas for the Classic Moth, the class being spread up and down the East Coast. John Z. and I loaded up our two boat trailer and drove the four hours down to race on Saturday at the Portsmouth Boat Club, Virginia.

Four Classic Moths showed up, down from the normal seven or so, as some regulars were either out of country or attending graduations. One thing I like about small classes is the camaraderie. You show up pre-race and there are hand shakes all around, then catching up on news of other regattas, and then catching up on what is going on in life.

Racing takes place off Portsmouth City Park and it is always like lake sailing ... this year 0-5 with holes and puffs and big shifts. The course is skewed but you don't come to Portsmouth to find a Race Committee gunning for U.S Sailing's St. Petersburg Trophy. They always have a large assortment of newbies in the Open Handicap Division and since I got my first baptism in sailboat racing in similar oddball courses, I applaud Portsmouth Boat Club. Almost everyone goes home with a trophy and let me salute the two kids in the Sunfish who someone in the RC (Dad?) was constantly coaching and the Melonseed traditional dinghy with skipper and son bringing up the back markers.

As far as the Classic Moths; we got a separate start, Mark Saunders and John Z. were battling up front the entire regatta. Mark won with 3 bullets to John's 1 bullet. Greg Duncan and I tied for third; each splitting 3 and 4 in the four race series.

For the BlogMeister.... I was slow on the offwind legs which seemed to be about 80% of the race ... the stop/start in light air has never been my forte in this class .... excuses .... well maybe my varnished Tweezer design is a little off the pace, maybe I'm a little heavier than the leading two competitors ... but it wasn't I lacked skill I tell you (well maybe it was dumb of me to ensnare the leeward mark in one race, to the point I had to remove my rudder to get off).

I wrapped up the regatta as I did the last time I sailed at Portsmouth ... I'm big on tradition ...... on coming ashore I thought I entered the shallows so I jump out expecting to wade to shore .... this time like last time, I jumped overboard to keep going underwater ... glub glub.

It was a great time!

A picture of the intrepid four 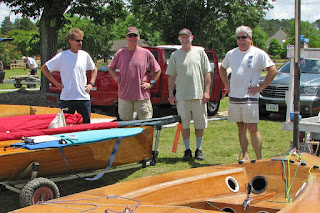 Posted by Tweezerman at 6:03 PM

TODAY’S MUST FOR MOST ELITES…
Yachting or Luxury Boating whatever you may call it, is a Leisure Loved the World-over!.. Undoubtedly an Industrialist or even a small Business Magnet can decide to Own an average Yacht or Speed-boat, & the decision would Really be right if it was to be just Onetime Investment Without any After-investment Tensions..that too, when an Owner is known to be able to Use/Enjoy It totally 25 Days/Nights in an Year!!...
The Ownership Economic entails endless technical tensions of Man-management-n- Maintenance, Berthing & Insurance etc….
http://www.mumbaiyachtclub.com/

RC sailboats are the most peaceful way to enjoy radio control boating. This way are also the hardest rc boats to master - with a nitro or electric model boat you can just open the throttle and blast round the lake.