Tillerman has posted a bucolic photo of lighthouses and classic yachts over on his site. Well, I was poking around my computer and came across this photo I had uploaded from the Web a while ago. It is of a singlehanded Solo dinghy (UK) in some breeze (SOME BREEZE??) 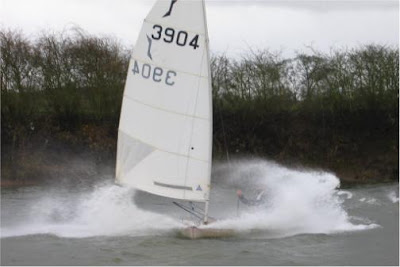 This has got to be the wildest singlehanded photo I've ever seen. For the spray to be blown flat like that, the wind gust has to be over 30. Looks like the poor skipper is a second away from having his tiny yacht driven under.


Update: Anonymous has identified the location......"Member of the Avon Sailing Club, sailing on the river Severn."

The Solo is another popular singlehander class in England (among a plethora of singlehanded classes in England). Designed by the great Jack Holt in the mid 1950's, the Solo is around 12.5 feet long (3.8 meters) and a hull weight of around 150 lbs. I think I lifted the photo from the Solo website. If anyone has the photographer's name, I would like acknowledge him/her.

I've done a more recent post (December 2011) about the Solo Dinghy over here.

Update: Oct 2012 - David Harris from Avon SC sends along a post mortem photo of Solo sailor and boat. Seems the mast complained somewhat about being sent out in these conditions. 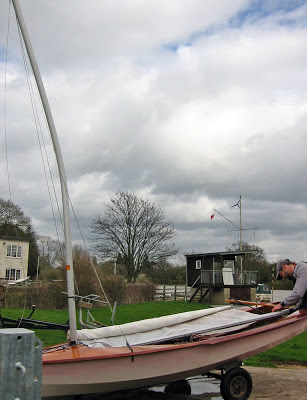 Posted by Tweezerman at 4:52 PM

Member of the Avon Sailing Club, sailing on the river severn

Thanks for ID'ing the location!

I have a photo of this boat 10 minutes later with a badly bent mast.
How do i upload an image

Scroll down the right side of the screen. When you get to the section "About Me", Click on "View my Complete Profile". My contact email is listed. Send me the photo and I'll make sure it gets into the post. Add a comment if you have a problem doing it this way.