In the month of March, I volunteered two weekends helping out the Naval Academy Intercollegiate Team with Race Committee (specifically finish boat with Midshipman James Allsopp).

First up was the John Jackson/Graham Hall Team Race on March 7. Actually it was quite a balmy weekend for the beginning of March. I have done some team racing in International 14's way back in the 1970's but the sport has really advanced. They have developed a Digital N course to enhance team racing moves. This course is short with races usually not taking longer than ten minutes. We had Gavin O'Hare, team race guru (he wrote the US Sailing book on it) as PRO. 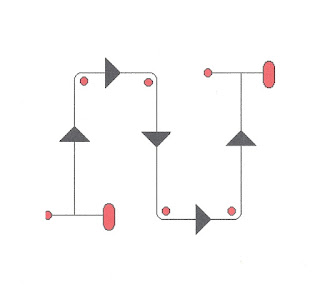 Starboard tack roundings open up some quite nifty mark traps I saw that weekend. The short close reach allows luffing duels to hold up the opposition while your teammate scoots away. The downwind legs allow plenty of opportunity to camp on your opponents air. The result was that most team races I watched that weekend were still very much in play on the final beat to the finish. Sometimes the win came down to which team could get the most boats on the starboard tack advantage coming into the finish.

Team racing has become very sophisticated and intercollegiate coaches devote a large portion of their spring practice working on the moves and countermoves. I hope to watch some more.

There is a fellow who travels the intercollegiate racing circuit and his website, Sailgroove.org , is filled with video, sailor and coaches interviews, results
Posted by Tweezerman at 7:02 PM