On the Road; Chestertown MD

The Classic Moths were over at historical and picturesque Chestertown, Maryland on July 11. Not that sailors ever stop to look at anything historical or picturesque as they dash to the Yacht Club. Let me note that the Saturdays farmers market in the town square looked very picturesque and worthy of stopping for a gander if the missus was in the car. But luckily she wasn't and we were late so it was.... stamp the tourist snapshot into the brain for the 20 seconds we were at the stop light.... and then off we went, 1/2 mile out of town to the Chestertown Yacht and Country Club.

Ten Classics showed up. A summer regatta at Chestertown has always been popular with Moth boaters but there was a time when the Chestertown Yacht and Country Club became more Country Club than Yacht Club. Thankfully, through the efforts of Bob Patterson, small boat sailing is making a comeback and this was the first summer regatta in several years.

The Chester River is narrow up at Chestertown, the sailing is always shifty... like lake sailing except for a wicked current. This year we had some breeze out of the south, building throughout the day. In the racing the choice seemed to go right for some big lifts and also some big holes, or stay left in some steadier breeze. It didn't matter much because the weather mark was tucked up at the bend of the river and left and right shifts became willy-nilly up there. He who lucked into the last shift got around first. The afternoon brought more wind with some wicked gusts. The log canoes racing at Cliffs City, about 2 miles downriver, really struggled in the breeze; I think 4 out of 7 capsized.

Mike Parsons and John Zseleczky continued their battle from Brigantine and finished 1,2 in the higher performance Gen 2. Regatta organizer Bob Patterson finished 3rd in Gen 2. George Albaugh, sailing the 2004 Europe that won the Olympic Trials, finished first in the slower Gen1 class with Ed Salva in another Europe, second and Victor Stango in a Shelly, third.

Tip of the hat to Bob Patterson who pulled off a great regatta.

Pictures from Ingrid and Elisabeth Albaugh. As always, click on the photo for a higher resolution image; 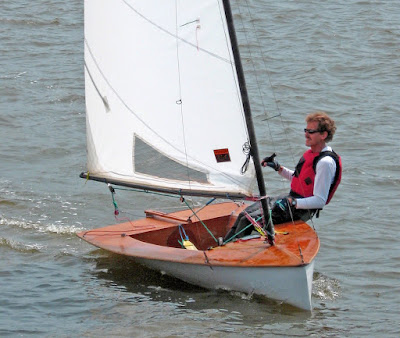 The Gen2 leaders Mike Parsons and John Zseleczky doing battle. John, why is your right foot up around your ears in this photo? 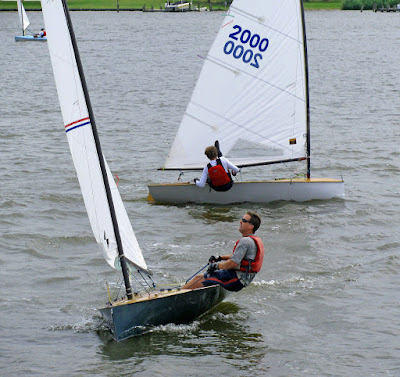 Classic Moths beating upwind with picturesque Chestertown in the background (I think it's picturesque ... Someone told me this town is pictureseque)

Gust on! Why is the 150 pounder on the left handling this gust better than the beef brothers on the right? 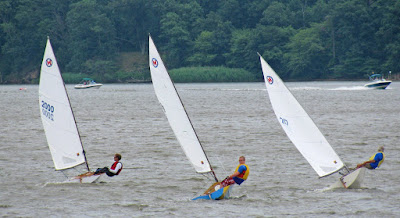 Start of one of the morning races. 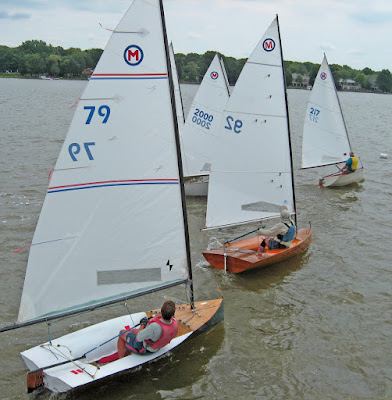 Great photos and what a great day. My foot is above my head in the one picture because I missed my hiking strap and was oh-so-close to doing a back flip. That Ingrid is pretty quick on the shutter to catch that one!

And I thought that it was a speed trick. Thank goodness I don't have to lift a leg that hi.