Tom Price has sent me a note that he won the IOD Invitational at Nantucket YC recently. What significance is this other than to tout Tom's racing prowess? Well Tom wrangled a guest invite to the IOD Invitational because he is the godfather to the socialist 210 fleet at Gibson Island YC and the Nantucket YC IOD fleet is also (gasp!) socialist run. How do you red bait these two upper crust yacht clubs as (oh! horrors!) socialist? Well, no individual ownership...both these fleets are run like J-World; you pay your yearly dues and get to rotate in and out on the fleet boats. What little I know of Tom's operation is the fleet has seven 210's (Ray Hunt design, double ended, narrow) with about 50 members who pay around $1000/yr (maybe a bit less). They are raced as a frostbite class at Gibson YC. I'm sure I will wrangle Tom to fill in the details on this cheaper way to sail on some very pretty traditional designs.

Tom has been a slim keeler fanatic from way back. He has owned several different makes and models. I have a vague recollection of sailing one of them with Tom ,my new wife and maybe Pete Teeling or Bob Brannan on South River in a nice seabreeze. My wife, who assumes all sailboats will tip over and sink, wore a gritty frozen smile and kept a death grip on the weather coaming as we spent most of the evening over at 30 degrees. A real trooper. 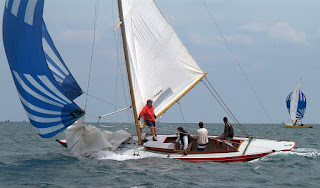 Postscript: Two names from my past also popped up at the Nantucket YC IOD Invitational score sheet. Laser buddy from the 70's, Kin Yellott crewed for his wife Sandy who finished second, and International 14 sailor from the 70's, John Pulverman, started off with a bang with a 1,2 but a DSQ and so-so last day pushed him down to 10th.
Posted by Tweezerman at 5:45 PM