Life During the Polar Vortex: The Interclub Dinghy Midwinters

I got an email from Alex Stout of SSA in early January stating that he was short one RC member for the Interclub Dinghy Midwinters slated to take place the end of January in Annapolis. After taking inventory of my shopworn and dated thermal outerwear (my drysuit from the 1990's is long gone - even the replacement seals have again rotted away), and expecting the normal daytime highs for January to remain around 40 F. ( 5 degree C.). - I agreed to fill out the team.

However in the week preceding the Midwinters, the Mid-Atlantic experienced some of the coldest winter temperatures in years with night-time temperatures plunging near 0 degree F. (-17 C.) and daytime temperatures hanging around 20 F. (-7 C.). The regatta weekend didn't look much better; temperatures on Saturday were to briefly get above freezing around 3 in the afternoon, not so on Sunday. Saturday's breeze looked to be very strong from the South. Needless to say I was having second thoughts about hanging out on the race committee boat in such conditions.

I drove down Saturday morning, hoping that Spa Creek in front of the club had iced over. That wasn't the case. (Turned out that there was a boat fire at a marina that week on the next creek over, Back Creek, and the Annapolis fireboats, in responding, had chopped up the skim ice that had been forming in front of the club.) I then was hoping that the breeze was too strong for the conditions -  which was exactly the case when I showed up. There was a delay - more-so to locate a pump - for, the Interclub is not self rescuing and requires a pump boat to remove the water in the event of a capsize. I was then hoping that the local rent-it places were out of pumps since there had been a spate of broken water pipes in this week of unrelenting cold. After two hours the search team located a pump and returned and by that time the breeze had moderated. Against all my hopes, the decision was made to send the sailors out.

The Interclub Midwinters are run like a college regatta, with results scored as a team comprised of an A division skipper/crew and B division skipper and crew. This is very sensible for the sailors for, at most, no team is out on the water longer than about an hour to an hour and a half. However, as I was to find out, this did not excuse the race committee from being on-station for the duration of the day. I made it through, for the most part, warm enough but by the end my feet were complaining despite several layers of socks.

Despite the cold, we were able to get off two solid days of short-course racing. There were a couple of capsizes early on but the breeze on Saturday came down to a manageable 10-15 and on Sunday we had a sunny 8-10. The Interclub with its high freeboard makes racing in such cold temperatures do-able (a Laser deck would have quickly become a sheet of ice) though, as an outside observer, one must question the lack of self-rescuing capabilities in this dinghy. (Pumping out an Interclub takes a while and ties up a rescue craft - luckily we never had more than one Interclub over at any time.). I was wondering when watching the racing why the roll tacks looked very lackadaisical. The Interclub, being a round bottom dink, is known to be easily flopped around with a snappy roll tack. I then realized the bottom of the cockpit on these Interclubs must have been an ice-rink and skipper and crew, mindful of this, were tiptoeing across on the tacks.

Results are posted over here. 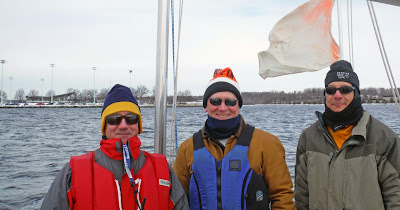 Interclubs coming up to the finish. 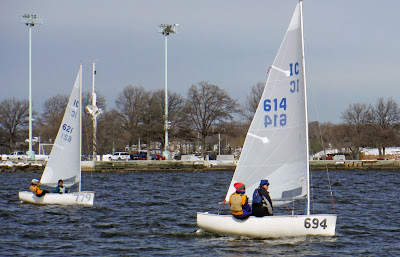 Coming downwind next to the RC boat. 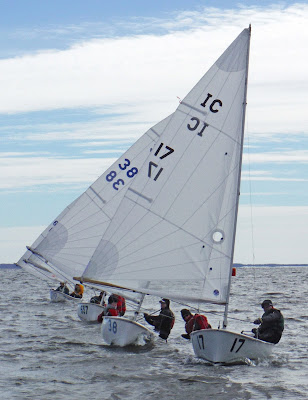 A daughter/mother team. Word on the street was the mom had never sailed dinghies before. What an introduction! (If you click on the picture you can see the icicles on the gunwhales.) 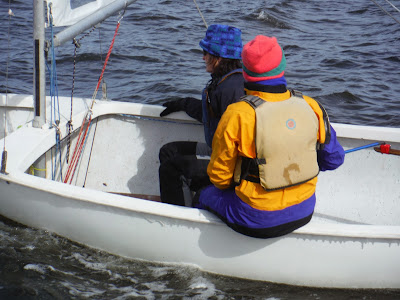 Posted by Tweezerman at 8:20 AM

Classic Moths aren't the only class that still clings to a pin head sail design!

You could say that at least 90% of the racing classes in the U.S still have a pin-head sail planform. With the Classic Moth, if you want to go to a shorter boom with the same luff length the only option is to pack more roach in the sail.