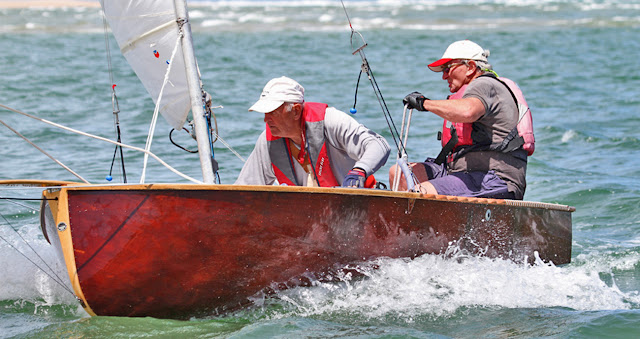 Photos from the 2019 ICWDR (Inverloch Classic Wooden Dinghy Regatta) held over the Australia Day Weekend (January 26, 27 2019) have been filtering into Earwigoagin Central. The previous header photo features the Gwen 12 class, another Australian Classic Dinghy class that is making a concerted effort to find and restore old boats. Four Gwen's showed up at Inverloch with Grasshopper, the Gwen in the header photo getting the Best Overall Award. From Andrew Chapman:


"The Best Presented Sailing Dinghy was won by Rod Mackintosh’s Gwen 12 ‘Grasshopper’ sail number 2846. Rod... traveled from South Australia to sail with the other Gwen's. When he acquired the boat it was covered in thick green paint and since then it has been completely restored with clear finishes all over. The Inverloch and District Lions Club Perpetual for the Best Overall boat at the regatta, which is selected from the category winners, was [also] given to Rod Mackintosh’s Gwen 12 ‘Grasshopper’."


Kiwi Neil Kennedy offers up this description of the header photo in "Strine" slang. (It would be nice to have definitions for all this, but with second thought, we'll leave it all to the imagination.)


"As the Aussie's would say " Strewth cobber, ... here is a header photo of two "old Galahs" in a Gwen 12 thinking they were 30 years younger as they get set for a downwind blast. Of course 30 yr's ago they would have been lean and tanned, wearing a footy jersey and shorts, with bare feet, and after blasting around the bay, would have returned to the beach where they would have had two Shiela's in minimal bikinis equally tanned lying on beach towels waiting for their blokes with cold beers ready and waiting in the "esky" for the boys to "scull down" while they derigged and contemplated the evenings activities with the Sheila's, knowing that they were "good sorts" who liked a drink or two and with the usual approach of Aussie girls in that era " if you want a "root" to round out the nights entertainment "just ask !! I kid you not, I lived there for four years and I remember well; " with more than a smile or two."


"In Adelaide, South Australia first off-wind leg (Close Reach to Beam Reach), 1 nautical Mile long, 3 minutes with a decent wind or more. She sits on a dinner-plate size contact with the water. Water spews out the well (up to 1 metre) and straight over the stern transom. Oh and something hums! If you are not anticipating this kind of speed then you underestimate the Gwen 12's capabilities. It's a heavy weather specialist. You can still put up a kite when no-one else can." 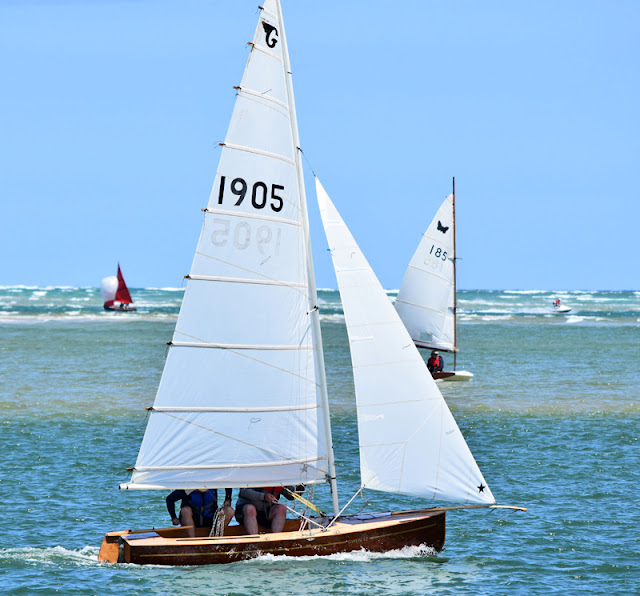 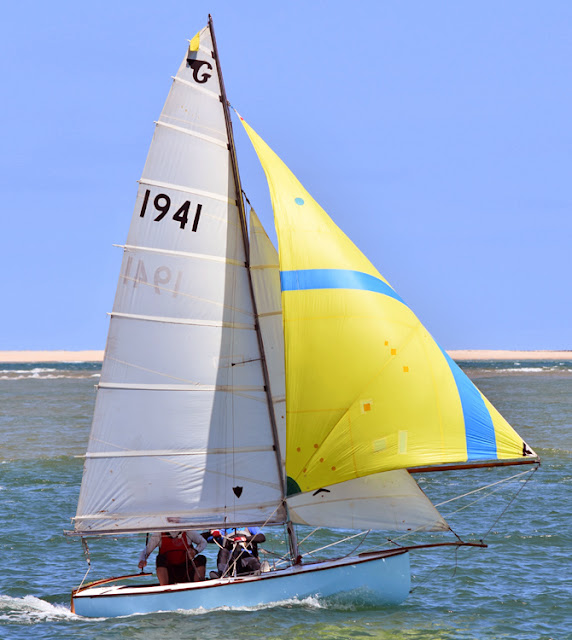 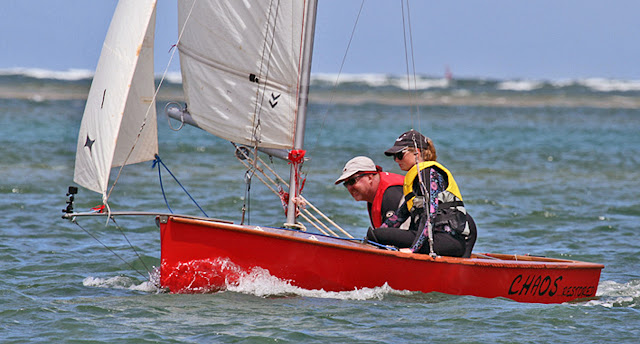 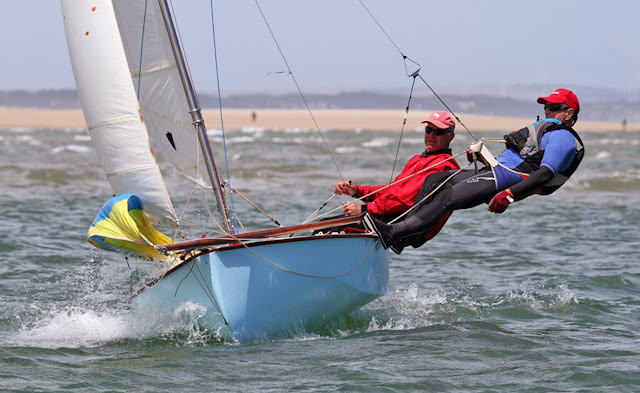 Back in my International 14 days, when we saw such a relaxing photo, especially with the spinnaker being ready to be deployed, we said the crew was pausing to make the skipper a cup of tea.

I've commented before in Earwigoagin about the seeming complete die-off of the single trapeze performance dinghy - a puzzlement to this old fellow who remembers large fleets of Fireballs and 470's and Flying Dutchman in North America. (The 505 soldiers on but at an almost professional level.) I can't think of a better plywood project for a single trapeze, spinnaker dinghy than the Gwen 12.

From Drift Media, the 2017 Dinghy Show on the Glade. (I'm not sure this happened this year.)

Apologies, but Andrew sent me photo attributions for these Gwen pics but I've mixed the photos up to the point I'll have to wait for Andrew to set me straight.

Posted by Tweezerman at 4:03 PM

Love the wood Nethercott, I think they are the most elegant of dinghies, ever.....there was one for sale in Vancouver when I got my old glass one, didn't have the money but it looked immaculate....

Neil Kennedy provides some definitions for the Strine slang used in the post:

Strewth - A common exclamation- No sure of the origin, to get attention- Remember that swearing was not acceptable ( as it is today) in public where women or children were around, and particularly by youths, and you would get a swift clip over the ear or worse a night in cells if you were heard or caught by the police.

Galah- a common Aussie parrot who sat in the trees and talked nonstop like a couple old blokes in a bar. Just a Bloody Galah meaning a useless bloke who tells everyone how good he is or was.

Esky- A container for keeping drinks in. When the first ones made from Polystyrene appeared one brand with appropriate advertising was called Eskimo, which as Aussies are wont to do, (everyone has a nickname.)...was instantly called an Esky and became the name by which every form of chiller was then known. An Aussie without an Esky filled with ice and a few cold ones (beers) was called very uncomplimentary names.

Good sort - a girl who could who handle her drink, cook, clean and look after the boys, do most jobs a bloke could do, handle a bit of man talk without blinking,and enjoyed sex and if she fancied you, a ready and willing participant.

Thanks for filling in the details. Feel welcome to add any other Strine sailor slang.