"Sunday September 7, 2014. Race one of the 2014 Canoe Worlds. San Francisco Bay. Wind was in a bit earlier than yesterday, but the usual direction, from 220 degrees -coming down from the Golden Gate -12 knots at the start which got off at 12:35 pm. Start line just north of Albany Hill, south of Brooks Island where it will likely be throughout this regatta [ed. note: One thing about SF Bay, the direction is consistent in the summer/early fall].The fleet (9 out of the fleet of 34 are the old Nethercott one-design, hefting a sizeable 83kilos around the course versus the new rules boats at 50 kilos) splits right and left out of the gate. It wasn't clear which side was favored but the fastest tended to go left. The course is triangle-windward-leeward-triangle with the finish to weather; the legs are 1.1 nautical miles. At the 1st weather rounding Chris Maas (USA) is hundreds of yards ahead. In not so close pursuit are the British duo of Alistair Warren and Robin Wood with Australian Hayden Virtue and another Yank Steven Gay, not necessarily in that order. Many spectacular capsizes in the 9 legs with the eventual winner Mikey Radziejowski (USA) followed by Steven Gay and Alistair Warren.

"The capsize with greatest impact was the hammer blow that befell Chris Maas who, when leading by hundreds of yards at the last weather mark and against all odds, caught the last couple of inches of his main halyard on the weather mark ballast snap shackle! It took Chris considerable time to undo this tangle. [ed. note - He eventually retired]


"Tacking these boats is very hard."

This was a quote that Swede Olle Berqvist gave to a reporter after finishing second in the 1981 Worlds on Buzzards Bay.

I previously wrote about the 9-point drill of tacking an IC in this post of the 1981 Worlds.

By 1993 I had gotten better at tacking an IC, but not good enough to avoid my fair share of problems getting from starboard to port and vice-versa at the San Francisco Worlds. One rich source of images from the 1993 San Francisco Worlds was a VHS video shot by the support-boat driver for Steve Clark. A copy made it to every IC fleet on the planet and provided much amusement over the winter. One of the sequences that elicited chuckles was me demonstrating the belly-flop tack, a last-ditch desperation move when things go wrong and the only option to prevent a capsize is to throw yourself front-first on the sliding seat, or whatever was extended of the sliding seat. 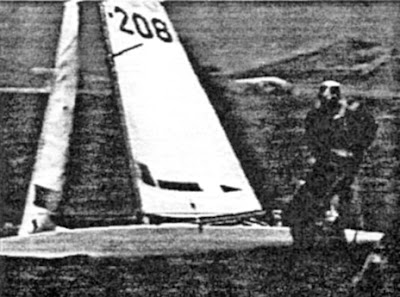 By contrast the same movie had a beautiful sequence of Lars Guck (who finished third at the 1993 Worlds) executing a perfect tack at the finish line (when most of us were so gassed that any maneuver at the finish provided enough follies to keep the finish line RC amused). Bill Beaver chunked the movie images into a primer on how to tack an IC in a breeze. (Click on the image to get a larger picture.) 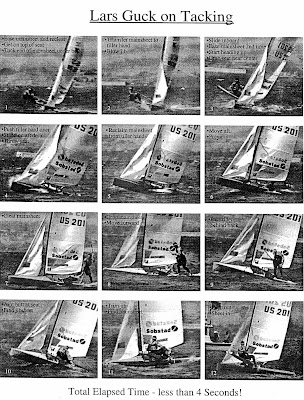 Posted by Tweezerman at 4:28 PM