"Thursday September 11, 2014. Race 5. It was a dead calm until the wind filled in, nearly an hour late . Start at 1:25 with 10 to 12 knot breeze from 205 degrees. Once again the course is triangle, windward, leeward, triangle finish to weather. At the first weather mark the rounding order was Chris Maas -USA 254, Stephen Clark -USA 250, Stephen Gay -USA 245. Second time at the weather mark Chris Maas remained in front with Stephen Gay and, Mikey Radziejowski - USA 248 joining the chase. Thrid rounding was Chris Maas, Mikey Radziejowski,  and Peter Ullman - GER 79, with the finish in that order. By the end the wind had built to 18 knots and the capsizes were aplenty, continuing after the finish, making the ride home difficult and piling on the exhaustion.

Erich Chase had developed a wicked fast way of getting down the reaches in the 1993 San Francisco Worlds. He would slide the seat all the way back, vang the bejeezus out of the main, and rocket down the reaches, hiking off the end of the end of the seat. It was doing the catamaran thing; as you went faster you developed more apparent wind and you went faster. And fast he went, usually passing to leeward in a blink of a second. Me, I delilberately had my speed dialed back as I picked my way downwind....going too fast risked launching and then stuffing, something Erich seemed to avoid. Plus I needed to save some energy for the upwind work. From the famous 1993 video of the SF Worlds here is a still shot of Erich doing the Wild Thing with spray everywhere. 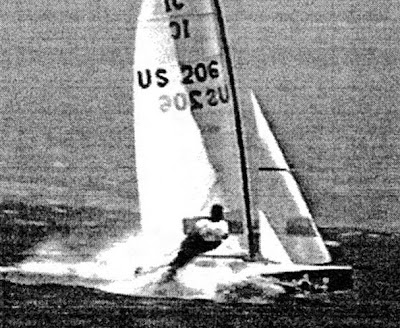 Bill Beaver from the Annapolis fleet picked up the technique quickly and was also bombing down the reaches, climbing for the sky, but with usually some disaster negating his gains. (like being bounced off the seat and wrenching his ankle!) Bill at speed at the 1993 Worlds: 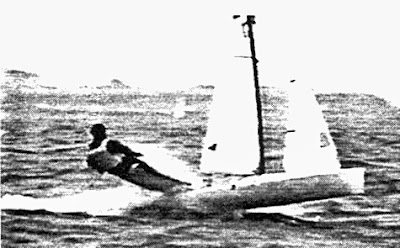 With the new rules IC's, being lighter and more skiff-like, this technique may be de rigueur, but since I've never sailed them, I'm not sure (they definitely need the seat all the way back since the new boats have very little buoyancy, initial or reserve, in the bow).

Posted by Tweezerman at 3:51 PM

Thanks for this history --

Whenever the cat guys talk about downwind technique, I start hearing that distinctive chord progression: "Dahn, Dahn, needer-dee-dee/You make every thing groooovy."
Oh boy. That's going to stick a while...

You forced me to go to YouTube to listen to the song again (though I knew exactly what you were talking about - more like repeated driving chords with talk-over/semi-sung lyrics).