The New York Canoe Club International Challenge Cup is the world's oldest small sailboat international race, dating to 1886. From the cup's history pulled from a short article put out by the British Canoe Union:

"An early Baden-Powell design was exported to the U.S.A. and international competition began when Warrington Baden Powell and Guy Ellington challenged for the New York Canoe Club International Cup in 1886. They found that the Americans gained extra power by sitting up on the deck of their canoes, using bodyweight to counteract the pressure of wind in the sails and the British were outclassed by this new technique.


Those dastardly Yanks were actually sitting on the high-side of their canoes instead of, as the English were doing, laying prone on the bottom of the hull - imagine that!

The International Challenge Cup is still competed in the International Canoes though the New York Canoe Club is long gone  [ed. note: Oops. Wrong about that one. Lloyd Herman, Vice Commodore of the North Shore Yacht Club writes in his comment, "The New York Canoe Club is not long gone - it has changed its name to the North Shore Yacht Club and is located in Port Washington, NY."] It is a three boat per country team race, two international teams, first canoe across the finish line wins that race for his country, best two out of three races wins the International Challenge Cup. The modern competition is held the day after the end of the World Championships. Fran DeFaymoreau has the report on the 2014 competition:


"Monday September 14, 2014. After the International Canoe World Championship it has been the custom in recent years to compete for the New York Cup. This is one of the oldest challenge cups still in competition dating back to the mid 1880's. Two teams of up to three canoes each compete and one sailor from from the team wins for the team. The USA was holder of the Cup and was challenged by the UK. The American team was Mikey Radziejowski, Chris Maas. and Del OLsen. The British team was Robin Wood, Phil Robin and Alistair Warren.

Race 1- "The first race was held at about the same location as the worlds but on a shorter course of triangle, windward leeward, finish to weather with 0.75 nautical mile legs. At the first rounding Del Olsen led followed by Alistair Warren. Alistair passed Del and won the first race. Mikey and Robin Wood were over early and not in the race. [ed. note: Race 1 to the English.]

Race 2 - "Chris Maas developed an early lead and held it to the finish in increasing winds up to 14 knots. He Was Followed by Mikey Radziejowski.

Race 3 - "With one race apiece The UK and USA needed one more race to decide the cup. This time Mikey developed an early lead with Chris behind but going fast enough to catch everyone but Mikey who, with a large lead, defended the cup for the USA.

And from the Earwigoagin archives! I have in my collection a newspaper article on the first race in 1955 of the New York Canoe Club International Challenge Cup.

"Great Britain, the mother of many of history's greatest sailors, today commanded a clear-cut advantage over the United States in the International Canoe sailing championship series being conducted on Hempstead Harbor off the Sea Cliff Yacht Club.

"Finishing first, second, fifth and sixth after knocking out America's ace at the start, the British scored 34 1/4 points in the first of three nine-mile races which will determine possession of the seldom publicized seventy-year-old International Challenge Cup.

"With two disqualifications within 400 yards after the start of the three-mile leeward-windward-leeward course which had to be traversed three times, the Americans were lucky to return to land with 23 points. All hope for the trophy defenders has not been abandoned , however, for they have two more races over the next two days in which they can regain lost water.

"Graham Goodson, the challenging team's captain from Aldeburgh, Suffolk, took immediate aim at the canoe being handled by Louis Whitman, the American team captain from Brooklyn and the fellow who brought the cup back here from England three years ago, and luffed him out of the race in the first 200 yards.

"Goodson then zeroed in on Joe Farrugia, a Queens member of the United States foursome and luffed him out within another 200 yards. Each time the Briton was to leeward and came about and then nicked the hull of the American. In as much as he had the right of way, the Americans were disqualified in each case because they didn't give way, and an embarrassed pair they were later.

"Goodson's maneuvers were not illegal or unsporting, let it be known immediately, for luffing in team racing is a most effective tactical bit of strategy if the victim leaves himself vulneralbe. Thats exactly what the Yanks did.

"Meanwhile, Ronald Head, the British champion from Twickenham, Middlesex, had taken the lead, and he never relinquished it. He covered the nine miles in 1:23:05 and was far ahead of his teammate, John Stothert of Ahterton, Lancashire. Frank Jordaens of the Bronx, was third, and Adolph Morse, of Yonkers was fourth.

"Goodson, the wily leader who had done his job at the start got home last among the six fininshers, just a few seconds after William Kempner of Brighton, Sussex.


The Americans must have come back to win the remaining two races in the series for they are listed as the winners in 1955. Here is a photo of Brit Ronald Head winning the first race. IC's have changed a lot in the past 60 or so years. 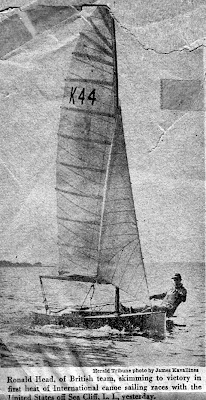 The New York Canoe Club is not long gone - it is now known as the North Shore Yacht Club, located in Port Washington, New York.

The New York Canoe Club is not long gone - it has changed its name to the North Shore Yacht Club and is located in Port Washington, NY.

Thanks for the correction. I added it to the post. At what date did the name change occur?

I sailed the City Island IC regatta several times in the 1980's. Actually watched an old video of Lou and company racing IC's with the crosshead tiller and flat seat. I've met Fay but I'm sure she doesn't remember me. The boat sheds at Grants were an amazing compendium of canoe history, which, unfortunately I didn't fully appreciate when I wandered through them.