2014 International Canoe Worlds - Races Three and Four, plus we backtrack to Race 2

Fran DeFaymoreau gives us a delayed report on Race #2 and adds Race # 3, and 4:

"Monday, 8 September 2014. Race two of the International Canoe World Championship. At the start, 12:35, the wind was 12 to 13 knots and building. The course was moved NW several hundred yards near the NW side of Brooks Island, Wind direction 205. The fleet split again with Chris Maas USA 254 tacking from starboard to be one of the few going up the middle of the course. But at the weather mark Mikey Radziejowski led by 100 yards with Chris Maas leading the next boat by over 100 yards. As the race progressed the distances between 1st and second and between 2nd and third canoes kept increasing till the intervals were over one quarter mile! Wind speed kept building and topped out near 18 knots with a short steep chop that made tacking quite a challenge. Many a capsize caused the typical "chutes and ladders" with constant place changes. Gear failures started mounting that forced two IC's to the "bone yard" an anchored buoy with a polypropylene line with loops for collecting out-of-commission canoes before they tow the disabled into Richmond Y.C.. At the finish Mikey Radziejowski - USA 248- was first followed by Chris Maas -USA 254 and in third, Phil Robin -GBR 328. With the wind up and the short chop many boats retired for repairs. Bent rudder shafts, broken tiller extensions kept the competitors busy after the race was over.

"Tuesday, September 9, 2014. This is a two race day. Race one [ed. note - Race three in the series] starts at 11:35 in atypical light winds - 4 to 5 knots from 205 degrees magnetic. The start of the course has been shifted NW another few hundred yards past the west end of Brooks Island. More of the fleet go left hoping for stronger wind but a few go right. A the weather mark local Del Olsen - USA 253 - rounds first but as the wind builds Del is passed by Robin Wood -GBR 329 - who finishes first and David Clark -USA 256 - finishing second. Del is third. [ed. note - Finally the lightweights get their day - Both David and Del being on the small size end of the scale in the IC fraternity]

"After a brief break race four gets underway in the same location. The wind is now up to ten knots and building. Once again most of the fleet goes left looking for stronger wind. Going up the middle allows for gaining on shifts but few choose that option as canoes prefer fewer tacks as the wind gets stronger [ed. note - Like catamarans, IC's in a breeze lose lots of distance in a tack compared to someone going uphill at Mach 1.5]. At the finish it is a photo finish with Mikey Radziejowski -USA 248 - being edged out by inches by Chris Maas -USA 254. Robin Wood - GBR 329 - is third.

Chris Maas has attached anti-diving winglets on his rudder, which, as far as I can recall, is a first for International Canoes (incorrect, see below).


[Ed. Note: Jim Champ corrects me. I've dragged out his comment: "Andy Paterson tried winglets on his experimental IC Tin Teardrop, but in lighter UK conditions he felt they hurt more than they helped. IIRC he may have tried running them without fore and aft seat adjustment. TinTeardrop was very fine aft, quite unlike the powerful stern on the Maas boat.]

This concept is not new. It was developed by the International Moth class (I think John Claridge had the original) in the late 1980's as the International Moth class hulls got narrower and narrower and getting down the reaches and runs without going head-over-heels became an issue. The idea is as the hull takes on a pitch-down attitude (prior to a nose-dive) the winglets at the back of the boat take on a negative angle of attack that sucks the stern down and reasserts trim equilibrium. It gave downwind control back to the narrow International Moths. I haven't heard whether it is working on the International Canoes but the new-rules hulls do have a reputation (compared to the old one-designs) of going down the mine very quickly and unpredictably in a breeze. 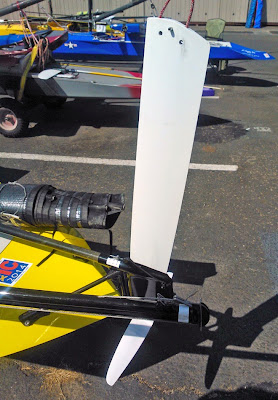 Posted by Tweezerman at 1:54 PM

If god had meant us to have winglets she would have given us featherlets.

Daggum-it! Right again Mr. Tillerman. This human invention is much too early. It's the dinosaur tree that developed featherlets and then feathers and then wings. We need the dinosaur tree to develop a larger brain capacity and better prehensile dexterity and social groups so they could farm and raise beer and industrial revolution and..... so this winglet invention could fit in the natural order of history. (And it might happen one day, though they might end up flying the boats around in competition.)

Andy Paterson tried winglets on his experimental IC Tin Teardrop, but in lighter UK conditions he felt they hurt more than they helped. IIRC he may have tried running them without fore and aft seat adjustment. TT was very fine aft, quite unlike the powerful stern on the Maas boat.