Today, Saturday, September 6, is the start of the 2014 World Championships for the International Canoe Class, hosted by Richmond Y.C. of San Francisco. Twenty one years ago I sailed my last International Canoe Worlds hosted by the same club. There are still some of those competitors from 1993 who are still going at it in these tippy beasts and who will be present on the start line for the first race on Sunday. Some names I recognize are the American's Steve Clark, Del Olsen, Dave Gilliland; the Canadian Bob Lewis; the Brit's Colin Brown, Simon Allen; the Swede Ola Barthelson and the Australian Hayden Virtue. San Francisco Bay always makes for a great windy regatta where sea stories spun on shore after the racing become legend and are told again and again.

For me, in 1993, I didn't cover myself in glory, finishing 44th, but glory wasn't the purpose as the regatta was sandwiched by a cross-country automobile family vacation with enough memories in and of itself. I raced not all the races, but finished enough of them to consider it a success. Participating in a World Championship in the big wind and waves of San Francisco was reward enough.

To commemorate the San Francisco Worlds, the hope at Earwigoagin is to post something on International Canoes every day this week. I also hope to have some reports from the current regatta as I have cajoled another ex-IC geezer to be Earwigoagin's on-site reporter . And you will definitely get some geezer nostalgia from the 1993!

I wrote some on the 1993 IC Worlds in this previous post.

Here is the only known photo I have from 1993. I'm in US 208, center-right in the photo, bailing out onto port tack after a very late start at the Race Committee end. I have a dim recollection of maybe getting a late push-off from the club and not quite making the start, or maybe I was doing an onboard repair (there seemed to be more than enough mucking around in the middle of the IC that regatta, fixing something that had broken). I was using a Kevlar jib back in the early years of mylar sails for dinghies. This particular sail was shedding large chunks of mylar every time I  had it out, hence the large patches of black sail number material. Amazingly the sail never ripped apart, despite large areas where you could see all the way through. I did revert back to a dacron jib later in the regatta. 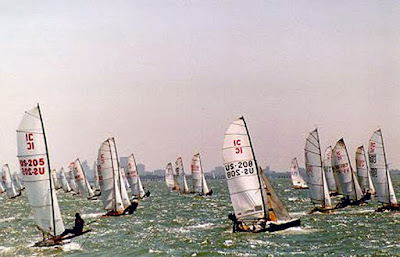 Posted by Tweezerman at 1:59 PM