North American Trapeze in the 1880's?

The history of the trapeze, the device where a crew dangles overboard from a wire or rope attached to the mast, keeps getting pushed back. It is obvious that the Polynesians were hanging from ropes on their proa's and catamarans before the modern industrial era (though I haven't seen any firm dates). The earliest I've seen the trapeze dated in Western Civilization was the early 1900' where crews were hanging off "Bell Ropes" on the large river racers, the British Thames Raters. Peter Scott and John Winter introduced the trapeze to dinghies in the International 14 Prince of Wales race in 1938 (where the class immediately banned them and didn't reintroduce them until 1969, well after every modern performance dinghy class of the post WWII era came out with them).

I was looking at an illustration by C.G. Davis, drawn in 1914, of the racing 88's of the St. Lawrence. The 88's were large racing canoes with two batwing sails in the typical cat ketch configuration. They were popular in the late 1880's, early 1890's. The illustration by C.G. Davis definitely shows the aft crewman hanging off a rope from the mast. Maybe we need to move the date of the invention of the trapeze (at least in North America) even further back. The original illustration: 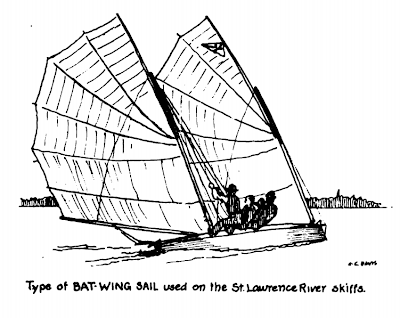 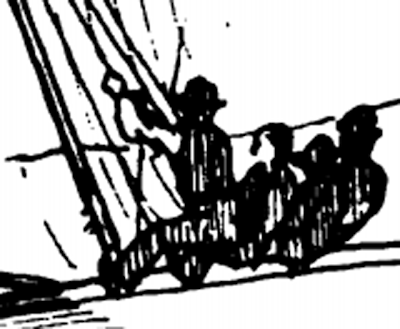 Posted by Tweezerman at 3:44 PM

Very neat. It's a pretty basic idea, so I'm not necessarily surprised at the early date. Cool nonetheless